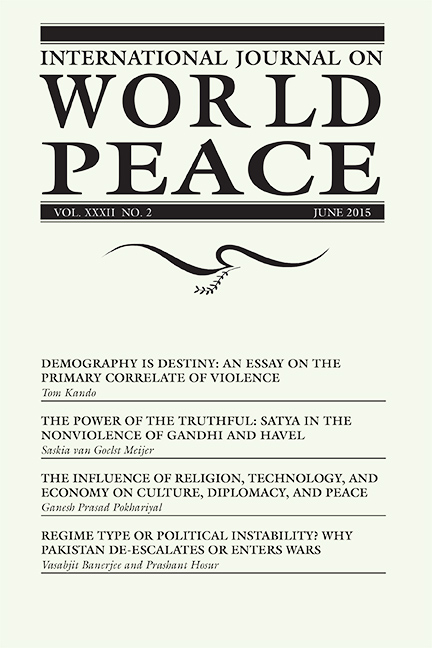 This issue of IJWP looks at the relationship of violence to what might be called “maturity of truth,” or personal and cultural wisdom. “Truth” is both individual and social. It is individual when it refers to a person’s attainment of an awareness of others as equally valuable and worthy of life in a shared world, and the knowledge and skills necessary to achieve a happy and fulfilling life through productive activities that do not harm others. Truth is social when it is embodied in civilization. By civilization, I mean a culture whose language, norms, institutions, and behavior patterns reflect a collective awareness of the worth of all human beings, human rights that apply to all people, and a level of knowledge and social organization that allows all people an equal opportunity to prosper.

Kando states that “youth idleness represents society’s failure to channel the energy of its most energetic members into constructive avenues.” This means that those social systems where families are broken, where schools are turning out graduates with a substandard education, and where unemployment is high are inevitably going to experience higher murder rates. But here we experience the “chicken and the egg” dilemma, for if murder rates and unemployment are high, lifespan and the median age will be lower. Social leadership will more likely operate like gangs, controlling society with violence, and extracting payments rather than providing opportunities, and this causes further economic stagnation and poverty. In such societies there will be fewer people who can pass on the non-violent norms of civilization.

In our first book reviewed, Why Nations Fail, Daron Acemoglu and James M. Robinson refer to such societies as having extractive social institutions. Throughout history, this has unfortunately been the norm more than the exception. Such social systems cause a “vicious cycle” of human suffering and poverty, where greater resistance leads to harsher repression. In such societies, loyalty to the leader, or “marrying the handsome prince,” is the only way to escape suffering and poverty. Prosperous societies, on the other hand, are inclusive social institutions: with pluralism, protection of human rights and property, and access to markets that will encourage people to make a life for themselves rather than being forced to beg from the rich and powerful. They argue that historically, when such institutions began to develop in Western Europe, a “virtuous circle” developed where the offshoot societies of Great Britain, in North America and Australia, went beyond Great Britain in developing universal suffrage and middle class prosperity.

Our second article, by Saskia van Goelst Meijer, is on the nonviolence of Mohandas Gandhi in India and Václav Havel in Czechoslovakia, two historical figures who helped break a vicious circle and begin a virtuous circle in their societies, where the majority of people had lived under oppressive and extractive institutions. Goelst Meijer discusses how the practice of satya, or “truth,” can create individuals and non-violent movements that can impact or change cultures rooted in extractive institutions whose leaders, often out of fear of losing power, use violence to repress populations.

A significant contribution by Goelst Meijer is her discussion of plural truth, or “pluriformity.” This was a concept promoted by Havel that he developed studying the thought of philosopher Jan Patočka. This understanding of “truth” recognizes that each person’s view of truth is conditioned by one’s own experience and is not synonymous with either another individual’s truth. Further, like Gandhi’s parable of the elephant, where each person who touches the elephant grasps the truth of the elephant differently, no language, ideology, or social institution can fully embody or own the truth. The truth appears in Socratic questioning and dialogue, and matures but never becomes absolute in its human expression. However, when one becomes sufficiently aware of truth, one can become capable of non-violent living and the development of ever-less-oppressive social institutions. The idea of pluriformity of truth nicely undergirds the idea of pluralism as an essential facet of the inclusive social institutions promoted in Why Nations Fail.

This provides an introduction to our third article by Ganesh Pokhariyal who has developed a model for understanding social change. In this model, politics (he uses the more polite word “diplomacy”) is shaped by culture, which “can be described as a way of life of a particular group of people, society, space, and time, which is reflected as the cumulative deposit of values, beliefs, religious practices and the concept of universe.” Culture, as lived, is the embodiment of the collective truth of a society, much like one’s personal consciousness is the embodiment of lived truth for an individual. Diplomats, or politicians, are those people who engage in relationships on behalf of the society, and Pokhariyal’s model suggests that they somewhat transparently reflect cultural consciousness. In other words, if a society is willing to use violence against another society to extract power or wealth for its own ends, the diplomat may make unreasonable demands to pay a protection fee or suffer invasion.

Pokhariyal sees culture as relatively static because it is transmitted through language and habits. Traditional societies resist change. Religion, information, technology, and the economy are components of a culture that can help it transform from poverty to prosperity. Pokhariyal observes that religion exists in two forms: (1) An unconscious or naïve form based on following what the priests in respective religions say, without bothering to question. For such people religion tends to be static and not embodied as truth. (2) A conscious form primarily based on individual’s understanding of the philosophy behind religion and, by one’s understanding and ego transcendence following one’s conscience accordingly in pursuit of the well-being of the entire humanity.

Diplomats who have developed this higher form of religious consciousness are more truly called diplomats rather than politicians, for they seek to achieve ends for one’s own group while seeking to avoid causing harm to other groups with whom they negotiate. Such an embodied level of religious consciousness is suited for life in a pluralistic world, a world that respects human rights. However, the unreflective form of religious consciousness that is displayed in religious fundamentalism will demand that everyone else conform or be considered inferior or worthy of death. Cultures can become more nonviolent over time if the reflective form of religion can come to pervade a population. Likewise, the reader can also gain an appreciation for the mediating influences of technology and globalization on the transformation of culture when thinking of designing social systems that are both prosperous and nonviolent.

In our fourth article, “Regime Type or Political Instability?,” Vasabjit Banerjee and Prashant Hosur survey the history of modern Pakistan and India and conclude that social instability correlates more strongly with why regimes go to war than regime type does. This may present a challenge to the “Democratic Peace Theory” promoted by R.J. Rummel in the first issue of this journal in 1984. However, political instability depends on changes in broader socioeconomic and institutional conditions, like those discussed by Pokhariyal in the third article. Thus the authors of both these articles point to the need for more research into systemic relations rather than merely a focus on the fragmented and linear analyses more common in contemporary social and political research.