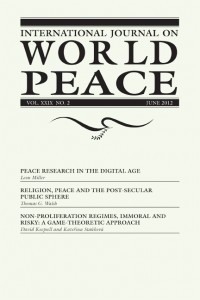 This issue looks at the thorny problem of how social ideals and rationally grounded moral principles can guide the structures and institutions of governance. This is no small feat in our age of political realism, power politics, national self-interest, and the general temptations of power and money. Washington DC lobbying, US elections, geopolitical nuclear politics, suicide bombing, and corrupt governments around the world are all signs that rational principles, such as those framed in the US Constitution, are failing to guide social policy. Rather we see power and money being used to dictate social outcomes biased towards those who have wealth or political power.

Our first article, by Leon Miller, begins by noting that the entire field of peace research is based on the premise that scientific research and humanistic values should be applied to institutions and structures of governance.  This field is indebted to the Enlightenment emphasis on reason, the vision of Immanuel Kant outlined in Perpetual Peace, the communication ethics promoted by Karl-Otto Apel and Jurgen Habermas, the peace research writings of Elise Boulding, the economic theories of Kenneth Boulding, the political science of Quincy Wright, and the social theory of Johan Galtung. These figures played a prominent role in the interdisciplinary worldview of the International Peace Research Association and peace research centers like the University of Michigan.

The field of peace research developed during the Cold War, in an effort to shed the light of reason on the nuclear arms race that appeared to be leading toward catastrophe with superpower politics driving the policy of Mutually Assured Destruction (MAD). Over the last half century, many valuable studies have been conducted and much has been learned by peace researchers, but world events seem to still be largely guided by power and money, and peace researchers often feel ineffective. Miller proposes that the peace research field might overcome some of its identity crisis by applying its moral values and guiding principles to new information technologies driving the evolution of global communication and new centers of power.

The second article, by Thomas Walsh, provides a complement to Miller’s article, arguing that without taking religion more seriously, the rational consciousness spawned by the Enlightenment will be ineffective in supplying the motivation and inspiration for social change. Such motivation for action comes from the non-rational and emotional aspects of our consciousness associated with religion and meaning. After providing an overview of  the rise of secular philosophy—the philosophy that underpins the peace research circles described by Miller—Walsh uses the evolution of the social thought of Jurgen Habermas as an example of how the role of religion is being reappropriated in post-secular consciousness.

Walsh acknowledges that much social violence in human history has been justified by religion, and that it has a dark side. On the other hand, religion’s call to forgive and live unselfishly lies at the foundation of the humanistic values that rationalists cherish and Miller extols. Thus, in a post-secular world, a dialogic interplay of secular consciousness and religious consciousness should lead to the transformation of both, expanding the horizons of Habermas’ original ideal of public discourse and universal  values.  Walsh also mentions the growing recognition of the role of religion in public affairs at the United Nations, beginning with the UN Millennium General Assembly and the ideal of creating a global culture of peace.

The stages of religious consciousness in Western Christianity are discussed in two books reviewed in this issue. The Church of the Empire Versus the Christian Church of North Africa: 312-430 AD by Terry Sullivan explains how a religion that promotes spiritual growth, a caring community, and social well-being can be coopted and manipulated by those with power who would turn it into the justification for nationalism and war. In 325 AD, the North African Church Fathers who created much of the foundation of the Christian faith were declared heretical and new doctrines that suited the emperor of Rome were declared official truth, and backed by military force.

The book Integral Christianity: The Spirit’s Call to Evolve by Paul Smith discusses how to transcend and outgrow these problematic forms of religion. Drawing on insights from Ken Wilber, Smith urges us to move beyond the Tribal church, the Traditional church, and the Modern church to an Integral church that can transcend and include the diversity of human differences and promote a unifying and enlightened consciousness of love towards others.

Other religious and academic leaders have come to similar conclusions about postmodern consciousness. In discussing the thought of the late Archbishop of the Eastern Orthodox Church, Paulos Mar Gregorios, John Kunnathu has written:

Noble prize-winning economist F.A. Hayek similarly spoke of these right and left brain activities as having a somewhat independent evolution, but that both have a role in developing an integral social consciousness to guide the governance of our societies:

Thus our morality, whose explanation and justification has seemed so unsatisfactory, is as much the result of an evolution­ary selection process as is our reason, which however stems from a separate development, so that one should never suppose that our reason is in the highest critical position and that only those moral rules are valid which our reason endorses. Certain moral rules which are not obvious to our reason nonetheless are the conditions for mankind being able to reach its current numbers.

It is interesting that, among the founders of religions over the last two thousand years, many have opposed property and the family. But the only religions that have survived are those which support property and the family. Communism is both anti-property and anti-family—and also anti-religion. Yet it is, I believe, itself a religion which had its time, and which is now declining rapidly. We are watching in it how the natural selec­tion of religious beliefs disposes of the maladapted.3

The above scholars indicate that governance based on modern reason alone might be compared to individual human beings with only the left half of a brain functioning. On the other hand, the pre-modern structures of governance based non-rational doctrines that have evolved could be compared to governance by only the right half of the brain. An integral view of the values that shape governance in the post-modern world must include the search for universal principles based on the dialogic interaction of religions with one another, and science with religion.

Our third article, by David Koepsell and Kateřina Staňková, is a scientific and mathematical research approach to the problem of nuclear weapons proliferation. It makes some astounding and controversial claims: that (1) the nuclear anti-proliferation treaty is immoral and (2) that it is scientifically unsound. Using game theory, the authors argue that the current international nuclear regime, in which a few countries have nuclear weapons, is more likely to lead to a nuclear war than if more countries held nuclear weapons. And, while the world would be safer with no nuclear weapons at all, once the technology has been developed—the genie out of the bottle—rogue states will be less likely to attempt a nuclear strike if many more states are likely to retaliate. This controversial conclusion is likely to draw reactions from both anti-nuclear activists and those leading nuclear states who employ power politics—two interests normally in opposition to one another.

The authors also foresee the attempt by Second Amendment proponents in the United States to use this logic to justify the claim that the more people who own handguns, the safer society will be. However, they note that states, as rational collectives, exhibit behaviors different from individual criminal elements. Nevertheless, state leaders with near absolute power have frequently exhibited criminal behavior, and one is forced to question whether the same application of their game theory to private ownership of small arms would indeed lead to support of the Second Amendment. If their article withstands scholarly debate, that would be a logical next research project.