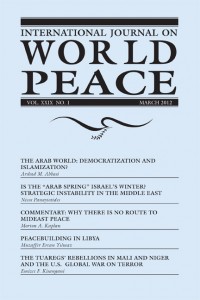 This issue focuses on the “Arab Spring” after a year has passed and three regimes in the Arab world have been toppled by waves of popular protests begun on December 18, 2010, when a Tunisian man in a remote village immolated himself. These changes are born out of frustration and idealism, and fuelled by new forms of communication like cell phones and the internet. However, the future of these countries is uncertain as there is not a clear plan for how the replacement regimes will deliver the freedom and economic development that protesters seek.

As we know from the results of the United States and French Revolutions, replacement regimes can take very different courses. In the United States, the Founders scoured the lessons of history to devise a constitution that created checks and balances on power, a constitution that limited the role of government and gave ultimate control to citizens, yet limited the bounds of popular control to prevent citizens from harming themselves by “mobocracy.” In France, idealism divorced itself from the lessons of history and sought to create a new regime based on reason. However, since most of human evolution involves non-rational values that have evolved over centuries, it was a shallow and idealistic government that did not protect the people from either revolutionary excesses or mobocracy.

Even the more successful U.S. Constitution of 1789 has run into challenges posed by moral relativism and economic corruption, so that today we hear people on all sides saying, “Washington is broken.” Over the years many of the checks and balances the founders put in place have been circumvented, and concentrations of financial wealth control the government through lobbying by special interests that do not have the happiness of the entire nation as their goal. Thus, the challenge of Arab states will be to not only “catch up” to democratic developments, but to learn from the successes and failures of modern democracies, as well.

Our first article, by Arshad Abbasi from Pakistan, looks at the competing forces of democracy and Islamic ideologies battling for control of power in emerging regimes. His subtitle, “Democracy and Islamization?” poses the question as to whether and how democratic ideals and Islamic values might be merged in a way that includes core elements of both yet transcends what both have known. He notes that the revolutions were fostered by democratic ideals, but that Islamic organizations have more practical experience with governance. Can some merger of  universal cultural values and democratic values take place so that structural violence is not imposed on minority groups? Abbasi concludes that, despite the possibility of a long violent confrontation, the two forces of democracy and Islamization are not necessarily mutually exclusive, but that an accommodation by each is possible.

Our next article, by Nicos Panayiotides in Cyprus, looks at the implications of the Arab Spring for Israel. In “Is the Arab Spring Israel’s Winter?” he argues that the increasing Islamization of the regimes replacing the more secular autocratic ones poses a challenge to Israel. Israel will continue to be a foil in the rhetoric of those seeking power in the Arab world because it resonates with the common perception that it is sitting on stolen land, even though many Arab states were also formerly under the same British protection and are defined by European-drawn boundaries. But Israel poses an external challenge that requires the acceptance of cultural differences that modern democracies have sought to allow internally. The first challenge for the new regimes will be for Sunnis, Shiites, Sufis, and more secular Muslims, all part of the larger Islamic civilization, to live with one another. The secular autocratic rulers that have been toppled created a rule of law that accomplished this to some degree.

One of the main political lessons from modern history is that regimes constantly create external enemies to maintain internal control and suppress freedom and political competition. The fallen autocrats were no exception. Can new Arab states create regimes that do not generate leaders based on the politics of fear?

Morton A. Kaplan argues in his commentary that current attempts to find Middle East peace are doomed to fail because Arabs are unwilling to accept the idea of  a Jewish state. Ironically, Israel has succeeded in creating a modern Jewish state that involves a mixture of traditional culture and democratic freedom for a wide range of Jews—secular to fundamentalist—who coexist in modern Israel. And, while Kaplan argues that the Jewish treatment of Palestinians, particuarly in Gaza, needs to be corrected, the general toleration of religion and the democratic processes inside an officially Jewish state are a source of its strength. One has to ask whether the structure of the Israeli political system might contain elements that Arabs, who want both their Islamic traditions and more personal freedoms, could adopt with some success, or whether the hatred of Israel in the Middle East might create a psychological blindness to this possibility.

Our third article, by Muzaffer Ercan Yılmaz from Turkey, looks specifically at the events in Libya and the possibilities for peace-building and democracy along more Western lines there. Libya is a country with many tribal and ethnic groups, some of which were suppressed by the regime of Muammar Qaddafi, who are vying for power in addition to the democratic and Islamist forces. Yilmaz outlines the basic steps of the peace building process, involving transitional justice, forming a representative government, strengthening security, making a new constitution, economic reconstruction, and national reconciliation. He emphasizes that since post-conflict situations usually require outside help due to institutional weaknesses, as well as limited human and financial resources, the assistance of the international community to Libya will be crucial in the process of peace-building.

Our fourth article, by Emizet F. Kisangani, looks at the Touregs who are traditional pastoral and trading tribes of the Sahel, to the south and west of Libya. These tribes, pressed by unnatural political borders and environmental scarcity, have fomented revolutions that have been confused with the terrorism of anti-Western groups. This has allowed the governments of Mali and Niger to receive anti-terrorist funds from the United States to further suppress these extremely poor people. This creates a receptivity  among the disenfranchised groups to accept support from terrorists who seek to radicalize them. The author argues that the governments of Niger and Mali should change their attitude towards these rebellions and allow them greater participation in the political life of  these states.

The Arab Spring represents both the failure of autocratic post-colonial regimes and a challenge to produce something better. A weakness of the rationalist regimes promoted by the French Revolution, the Communist Revolutions, and to some extent National Socialism and Fascism, is the outright rejection of traditional religious and cultural values that provided social cohesion to previous societies. Many modernists have criticized these values because they could not be proven by modern science and reason, and with great arrogance they have attempted to run roughshod over these values in their attempts to create modern bureaucratic states, undermining the values that allowed such states to emerge in the first place.

Human societies, like human brains, are much broader and more complex than the rational principles that can be written into Constitutions. Just as human behavior is perhaps 95 percent governed by habit and emotion, so too the bonds that unite societies are largely non-rational cultural adaptations that have evolved over thousands of years of social experimentation, from which the most successful societies have emerged. But as these plural cultures collide in the modern world, it is most important that rule of law allow them to live alongside one another, rather than imposing the values of a specific group upon the whole.

In Spirit of the Laws, Montesquieu discussed the problems of unity and pluralism. He argued that first principles are those applicable to all societies by virtue of the nature of reality and human existence. These first principles can provide the parameters within which diverse societies can create derivative principles, or principles that govern their particular social groups and institutions. The U.S. founders stated what they believed to be universal principles in the language of “self-evident truths.” A modern government has to be limited to this type of principle if it is to avoid the suppression of minorities. In the Arab world, articulating such general truths that are more broad than the particular expressions of Sharia law will be the challenge in creating societies in which the Arab Spring can enable the various gardens of human happiness to bloom.