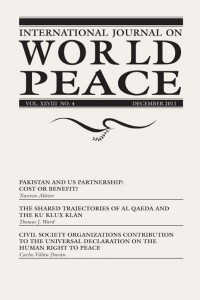 This issue of IJWP contains three articles that reveal some of the toughest challenges to peace that relate to imbalances in power, imbalances in wealth, and imbalances in the treatment of individuals and groups.

Our first article, by Nasreen Akhtar, is an analysis of Pakistan-US relations that, in many respects, complements the article on “The Obama Administration’s Strategy in Afghanistan” in the September 2011 issue of IJWP. It presents a Pakistani perspective on the challenges Pakistan may face when the United States and its allies withdraw from Afghanistan. The states occupying and attempting to stabilize Afghanistan share no common borders with it and thus will not be subject to cross-border insurgencies if they withdraw.

Pakistan’s strategy to protect itself, in the absence of US forces, has been to coexist with the Taliban. It officially abandoned this support, even though the ISI may be guilty of continuing to provide the Taliban safe haven in Pakistan during the foreign occupation of Afghanistan. Now, with the prospects of foreign withdrawal, Pakistan is tempted to revert to its former position on the Taliban. Further, the assassination of Osama bin Laden  and the drone attacks that violate Pakistan’s sovereign territory, often killing civilians in collateral damage, have increased dissent in Pakistan toward its government’s policies.

The second article, by Thomas J. Ward, provides a unique comparison of Al Qaeda and the Ku Klux Klan (KKK) in the United States. Ward argues that, unlike the defeat and quick social stability achieved in Japan and Germany after World War II, the initial defeat of Al Qaeda in Afghanistan has failed to quell the affinity of a significant segment of the society of its violence and social destabilization.

Both Al Qaeda and the KKK were movements of resistance to occupation based on moral justifications for the superiority of their ideals. While Al Qaeda emphasizes religious doctrine and the KKK focused on racial purity, they have more in common with one another than might commonly be suspected. Both oppose pluralism and both advocate violence. Dr. Ward suggests that understanding how the influence of the KKK was ultimately defeated in the United States can provide useful information for shaping a strategy for the defeat of Al Qaeda in Afghanistan.

Finally, our last article is on the development of the Human Right to Peace and the efforts to promote the adoption of this right at the United Nations. It is written by Carlos Villán Durán, from Spain, who has been actively involved in the process. This article shows many of the definitions and forces at work in the attempt to develop the Human Right to Peace.

A holistic model of peace is, in many ways, a non-religious vision of an ideal world. It inevitably includes components that will threaten people in power and demand duties of ordinary people that will be resisted. One major obstacle is related to the levels-of-analysis problem. What are the rights and responsibilities of individuals, cultural groups, NGOs, states, and the United Nations?

Then, there are the traditional arguments over “positive rights” and “negative rights.” Typically, a negative right is something that a state can provide. Examples would be the protection of free speech or property, where a state can use its force to punish those who would impede free speech or prosecute those who take another’s property. Positive rights refers to ideals, because economic and cultural conditions are required for their realization. For example, the “right to adequate housing” requires the material and human resources to build houses. These are not a product of state power, but of economic development and labor skills. No declaration of a positive right by a state or group of states can guarantee its implementation, whereas negative rights are basically implemented through police and courts.

Finally, the implementation of rights requires the fulfillment of duties. Everyone wants rights, but people are less enthusiastic about performing the duties these rights require. Such duties can only be willingly performed when social consciousness has come to accept them as necessary. Such consciousness has historically been considered the realm of religion—something that is separate from the state. Yet, some universal secular version of human ideals is required to implement the Human Right to Peace.
Professor Durán’s account of the work to promote a human right to peace is both instructive and a challenge on many levels. We have included the actual documents that Civil Society Organizations (CSOs) approved after the end of his article.