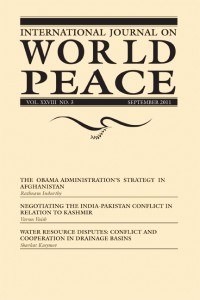 Rule of law is necessary for the order, stability, and peace of any nation.Without rule of law there is anarchy in which gangs, warlords, and conquerors compete for control to establish their own rule of law. As Augustine of Hippo said,

Even while waging a war, every man wants peace; whereas no one wants war while he is making peace. And even when men are plotting to disturb the peace, it is merely to fashion a new peace near to the heart’s desire; it is not because they dislike peace as such. It is not that they like peace less, but their own kind of peace more. And even when secession is successful, its purpose is not achieved unless some sort of peace remains among those who plotted and planned the rebellion. (City of God, Bk. XIX, Ch.12)

The “peace” of a ruler is seldom the “peace” of the ruled. While many people can be “pacified” by a ruler who gives them a measure of wealth or freedom, people generally seek self-determination. Most people consider rule by a conqueror as an occupation and oppression, and not peace. They do not want to spend their lives serving the whims of the most powerful person, making him rich and happy at their expense.

It is easy for people of different groups to align themselves against a common oppressor. In the recent movie, Cowboys vs. Aliens, this unity against an  invader was overdramatized when local authorities, cowboys, outlaws, and native Americans—groups that had warred with each other—fought side-by-side against a more powerful alien invader. However, when it comes to self-determination, it is much more difficult to create a social consensus on the nature of the new “peace.”

Instances of self-determination societies the size of states are rare. Generally, after an oppressor is thrown off, the various groups that made up the coalition return to bickering. However, a few instances stand out in human history: Rome’s adoption of the twelve tables, the formation of the Netherlands after Spanish rule was overthrown, and the formation of the United States after British rule ended. In these instances the “peace” established through rule of law has reflected a social consensus among the people; self-determination and rule of law are harmonized.

In some cases, a state that began as the result of conquest is transformed from within as freedom and self-determination are progressively won within the system. Here, the British system stands out as one that progressively decentralized and liberalized political and economic power, enfranchising ever more citizens with the opportunity for self-determination.

Today much of the world is in relative anarchy as a result of power vacuums created by the nineteenth and twentieth century empires that have imploded. The collapse of the French, British, Russian, and American Empires has left many parts of the world happy to be free of imperialism, but without any consensus on the formation and self-determination of their  societies. Many formerly occupied, or foreign-stabilized, states have thus become battlegrounds. They are battlegrounds between domestic gangs and warlords, as well as regional hegemons seeking to enlarge their sphere of control.

Modern battlegrounds are not merely over land. They are over water, clean air, natural resources, and other material necessities of life. The less a legitimate rule of law can be enforced, the more bloody and cruel these contests become, and the more the animal instincts for personal survival take over. Peaceful states are not created overnight. Simple political formulas, like holding elections, having a free press, and universal education are inadequate, for all these social institutions can be manipulated by those contesting for power—through election fraud, control of information, and ideological indoctrination.

Self-determination of states ultimately requires a large agreement on what is important, what is the purpose of society, and how people are supposed to behave. These things are provided by cultural values. Each of the great civilizational spheres we have inherited provided their societies with a consensus on cultural values that were considered valid by nearly all citizens living on a territory. Rule of law cannot be perceived as legitimate if it goes against the cultural values of those on whom it is imposed.

However, modern societies are increasingly pluralistic. Globalization has enabled people of all cultural backgrounds to interact in business, trade, and on the internet. Wars have displaced refugees from one civilization that have been taken into countries of different civilizational spheres. Migrant workers have created new cultural groups, often marginalized, within formerly homogeneous nation-states. This pluralism challenges any attempt to create a stable rule of law based simply on inherited cultural tradition, and those societies formerly rooted in one civilization are becoming increasingly fractured as those roots apply to decreasing percentages of the population.

Modern secularism, the idea that social peace is achieved by ejecting traditional values and implementing some ideology based on reason, has not been able to provide the common social purposes and behaviors necessary for cultural cohesion. We witness a global melting pot in which some new cultural consensus is necessary for self-determination of states to be seen as legitimate. This will require transcending and including elements of past civilizations that allows people to organize many local activities based on their inherited cultural systems, while at the same time creating legal systems that secure borders and protect property and trade without imposing social institutions like public schools that indoctrinate and oppress the desire for self-determination.

Modern conflict zones around the world as well as culture wars within Europe, the United States, and the former Soviet Union reflect the inability of modern states to arrive at the proper balance of rule of law and self-determination, something which many have called the challenge of the “second axial age” (the first axial age being the period in which our major regional civilizations were given birth). The Israel-Palestine conflict, the Kashmir conflict, the Korean conflict, and the wars in Iraq and Afghanistan can all be viewed in light of the challenges of the balance of self-determination and rule of law under conditions of cultural pluralism in the modern world.

This issue of International Journal on World Peace shows how traditional approaches to conflict resolution and peace are failing to create peace in Afghanistan and Kashmir, two areas in which tradition and modernity  are colliding in the context of a power vacuum created when previous empires collapsed.

The first article on “The  Obama Administration’s  Strategy  in Afghanistan” by Rathman Indurthy is an excellent history of the US effort to create a “nation-state” in Afghanistan, a country of tribal societies never unified by a common social consciousness. The decade-long effort of the United States  is reminiscent of the decade-long Russian effort to do the same from 1978-1989. The Russians warned the United States then and can say, “I told you so.”

The second article, “Negotiating the India-Pakistan Conflict in Relation to Kashmir,” is a look at that conflict from a more integral, transdisciplinary perspective by Varun Vaish. This article concludes that the imposition of rule of law has traditionally been over-emphasized by conquerors and today it is being over-emphasized in peace agreements and by the United Nations. Only when the principle of decentralized self-determination, which conflicts with the principle of centralized rule of law, can enter into a balanced relationship in modern states, will a relatively peaceful society be possible.

Finally, our third article on “Water Resource Disputes” by Shavkat Kasymov shows that the dynamics of conflict and cooperation do not necessarily relate to the state borders created by past conquests, but the solution to problems where peoples or states share resources, like rivers, must be worked out by all parties that use these resources. Kasymov asserts that consensus, rather than unilateral force, is required: “Induced cooperation presupposes the application of incentives for cooperation, instead of force.”

The main level of analysis for a drainage basin is not a nation-state, and the solution cannot come from the principle of national sovereignty.  The sovereignty of tribes, cultural groups, and river basins all have claims to make on the modern nation-state. State sovereignty, the mantra of the post-Westphalian world, must be necessarily limited by claims to sovereignty by individuals, tribes, and rivers. An integral view of society must recognize that “sovereignty” belongs in proportion to all people and all things, and that there is no absolute sovereign in this world. There is an interrelating series of systems, subsystems, and relationships that each maximize their sovereignty in proportion to their ability to exercise responsible self-determination that recognizes the rights of others to do the same, and creates the appropriate rule of law to govern such systems.