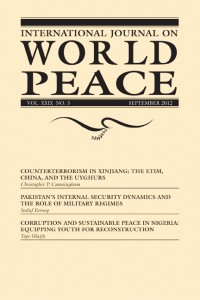 This issue examines three states where there is political instability; Xinjiang province, Pakistan, and Nigeria. Xinjiang province is in Western China bordering Kazakhstan, Kyrgyzstan, Tajikistan, Afghanistan, and Pakistan. The largest ethnic group in the region is the Uyghurs, a Muslim group found in Central Asia, but Han Chinese are the majority in the cities. As in the case of the Tibetan Buddhists, tension exists between the Uyghurs, who do not feel they can freely practice their culture, and the Han Chinese who are increasingly populating the region.

Since 9/11, the Chinese have convinced the U.S. to label the Uyghur separatist organization, ETIM, as terrorists, based on their proximity to the Muslims in Afghanistan and Pakistan and supposed links to Al Qaeda. The first article, by Christopher Cunningham, asks whether the Uyghurs are a terrorist threat or whether Beijing has preyed on the international fear of terrorism to suppress the religious freedoms of an indigenous nationality that is defending its right to self-determination. He concludes that Beijing has likely overstated its case and the U.S. supported Beijing’s attacks on the Uyghurs to garner support for its own war on terror against Al Qaeda.

Our third article, by Tope Olaifa, on systemic corruption in Nigeria laments the endemic problem of an entire culture where patronage and graft is the norm. Olaifa argues that when a nation’s leadership practices corruption as the norm, the next generation adopts a similar consciousness. The author argues that moral reform involves an education that enables youth to see the world from a wider perspective than one simply focused on finding ways to get money from others. Good governance requires a culture in which both leaders and citizens have a moral consciousness that transcends the special interests of individuals and groups.

These three articles together make the point that regardless of the form of a regime—an occupation, a military rule, or a democracy—the self-interest of rulers inevitably trumps the interest of the whole. Human beings long for “good governance,” yet since the rise of the modern nation-state we are hard put to find many examples of states where rulers—whether ethnic groups, military generals, or democratically elected officials—reveal a disinterest for themselves and a passion for the well-being of the citizens.

Political science teaches that there is no such thing as an altruistic or disinterested ruler. Indeed, even when citizens work for a government bureaucracy and are forced to choose between reducing their own wage or rationing the services they provide, they inevitably choose to look after themselves first.

Therefore, a good political system has to be based on the assumption that human self-interest must be checked at all levels. “Do no harm to others,” a basic doctrine of Buddhism, was also the primary assumption underlying the creation of the U.S. Constitution. However, such constitutions are easily subverted and corrupted by rent-seeking individuals, tribes, corporations, and political parties. A government is only as good as the culture that sets it up, which is why it is often said that Western Democracy could not have emerged without the Protestant Reformation that instilled in the consciousness of believers an ethic of personal responsibility, hard work, living from the fruits of one’s own labor, and living compassionately towards others.

The challenge that Olaifa implicitly poses is: “Can public schools, supported by modern secular governments, teach the core values necessary for the sustainable economic development of a state?” Modern educational institutions, in the name of pluralism and rationality, have tended to divorce themselves from all values because they were tied to non-rational religious doctrines, even though they are essential for the success of the modern state. This has laid the door open for corruption in all modern states, not just the less-developed or non-Western countries, as moral values are divorced from public culture. Olaifa’s language is not rooted in a particular religious position, but argued from a rationally argued social need.

Finally, I want to mention the book review essay by Tom Kando, as it touches on this issue of true and false values and philosophies in our modern world. Kando’s essay is a dialogue with David Deutsch’s The Beginning of Infinity (2011). Deutsch, a student of English philosopher Karl Popper, makes a similar statement to Olaifa that education can enable us to discern true and false universal values, and that when we can recognize this we can begin to dispense with evil:
All evil is caused by insufficient knowledge. Along with better knowledge, we achieve moral, institutional and cultural progress. “Morally right values are connected with true factual theories, and morally wrong values with false theories.”

Deutsch argues that genuine learning does not primarily come through rational processes like those of logical positivism, but through replication of meaning and the acquisition of memes. In his view, the turn towards universality in humans began with the Enlightenment, where progress could be achieved by questioning authority and seeking better universal explanations. Empiricism and positivism severed the connection between science and actual reality and do not provide truth or meaning. This does not mean abstractions cannot affect reality; they can—as memes with meaning—something that positivism, reductionism, and empiricism do not create. Rather, the advances of culture are emergent evolutionary processes.

Deutsch sees culture, not government, as the arena for human advances. When government attempts constructive action it inhibits the creative evolutionary processes. The role of government is not to create a perfect utopia, but to remove the worst political errors from the government that already exists—an evolutionary view.

While Kando portrays Deutsch as sometimes excessive and full of hubris, he is generally won over by the main points of the book. If Deutsch is right—and he is in general agreement with the increasingly popular field of integral studies—public education is in need of dramatic reform of some of its contemporary core premises of pluralism, value relativism, and scientistic rationalism.

School teachers often emphasize rote memorization rather than meme transmission and universal values. Public schools do not aim at the development of what integral philosophers Sri Aurobindo and Ken Wilber have referred to as a “second-tier consciousness,” a true adult-level development that gains a comprehensive, big-picture, understanding of the world. Such an understanding that sees oneself a part of a larger interconnected and evolving whole, can be a primary basis for transcending selfishness and preventing harm to others. From this perspective, the Han Chinese elite in Xinjiang, the military rulers in Pakistan, and the government officials in Nigeria are all people in positions that require a moral consciousness that is greater than their own level of moral development.

The contemporary world has benefited greatly by modern reason and science, but reason and science have proven unable to create the type of second-tier consciousness that the world’s great religious and cultural traditions have instilled. Our current challenge, emphasized by Olaifa, is to learn to understand the validity of inherited values and their evolution through cultural memes. Or, as the evolutionary philosopher Hayek has said, “History will dispose of maladapted societies.” This comes at the price of great human suffering. Perhaps The Beginning of Infinity has arrived and Deutsch has helped us to see more peaceful ways of disposing of the evil in our societies and emotional revolutions without creating total social collapse.