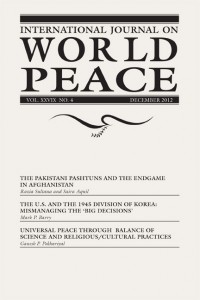 Conflicts are produced when great powers or international organizations draw arbitrary state boundaries over areas occupied by tribal and national cultural groups. When this happens, homogeneous groups that have lived together for many generations, and that have had their identity formed by shared values and laws suddenly find themselves divided and forced to live with other tribes or national groups that hold different values. Imposed abstract state boundaries divide natural nations, disrupting normal interactions, and even separating families.

Such divisions are particularly evident in post-colonial Africa, Asia, and the Middle East, where Europeans drew administrative districts on maps over areas of land without much thought about the national self-identity of the peoples living in that territory. Such divisions are the cause of much anguish, strife, and even genocide in our world. The process of absorbing different national groups has followed conquests throughout history, and leaders of empires often left local rulers with some autonomy that honored the local values and customs. Today we are particularly aware of the after-effects of European colonization of Africa and Asia in the 19th and 20th centuries because, as Europeans withdrew, the states left behind were composed of non-natural cultural groupings not predisposed to live peacefully together.

The lines of these abstract states can be viewed somewhat ambiguously, not as all good or all bad. In multi-ethnic states people are forced to learn to live with one another in nonviolent ways, whereas traditional tribal borders absent regional hegemonies are often areas of constant violence, war, and displacement. We witnessed this in human catastrophes as refugees fled from Cambodia, Laos, Bosnia, Rwanda, the Democratic Republic of Congo, Ethiopia, Sudan, and Syria in recent decades. It is normal for natural nations (tribal and ethnic groups) to seek to control artificial states, and to use the power of the state to exploit other groups for their own benefit. This phenomenon manifested in its most extreme form, genocide, in Germany, Cambodia, Bosnia, Rwanda, and Sudan.

There is another problem that occurred in Louis XIV’s France, the United States, Soviet Russia, Maoist China, and the European Union, where state regimes, interest groups, or elites attempt to force the values or ideology of a ruling class onto inhabitants that do not all share those values, causing oppression, unrest, and violence.

Ancient political philosophy generally assumed that there would be an official value system without separation of church and state. Aristotle argued that the size of a polity had to be limited by the ability to have face-to-face interaction in order to for the official values system to emerge. Athens, whose democratic assembly at one point had 2700 citizens who made the laws, was considered by him to be about the maximum size of a democratic state. This democracy had official gods like other ancient societies, and Socrates was sentenced to death in that democracy on charges of impiety to the gods. The Roman Empire also had official gods, but after Christianity became the official religion, it was difficult to maintain a monolithic cultural system over the extensive empire, and it fractured along Roman and African lines, and then between East and West, and finally into various religious orders and denominations. While some general Christian ideas were accepted throughout Europe, the religion of the Empire never completely replaced the local face-to-face value systems.

A major advance in political theory on the concept of unity and diversity is found in The Spirit of Laws by Charles Louis de Secondat, Baron de Montesquieu. He argued that there are first principles of politics that derive from the nature of reality and are applicable to all human beings and societies. The cultural norms and social conventions of tribal, ethnic, and religious groups he called derivative principles. The U.S. founders, influenced by Montesquieu, designed the U.S. Constitution with the understanding that the first principles that underlaid the political system were articulated in the Declaration of Independence. If all the diverse cultural groups in the United States could accept the idea of “that all men are created equal, that they are endowed by their Creator with certain unalienable Rights, that among these are Life, Liberty and the pursuit of Happiness,” then they could promote their own concepts of education and welfare in local communities and the states.

This system worked rather well, with the notable exceptions of the institution of slavery that was a direct violation of  the founding principles, and what can be called a Christian chauvinism that attempted to force particular beliefs on the entire society—calling the United States a Christian society. This was followed by a reaction among secularists who attempted to divorce American pluralism from the foundational first principles articulated by the Declaration of Independence upon which the political system was structured.

The legitimacy of the federal government was weakened each time specific laws and rules related to social and economic norms were imposed by Constitutional Amendments and Supreme Court decisions at the federal level. For example, when the Supreme Court, acting outside its original mandate, issued rulings on derivative principles related to marriage, abortion, and other social issues that its diverse cultural traditions practiced differently, it alienated minority groups, caused “culture wars,” and weakened the moral authority of the government, whose first principles nearly all cultural groups can accept.

Our first two articles in this issue relate to conflicts that have resulted from natural nations—the Pasthuns and the Koreans—being divided by political boundaries. These divisions relate to two serious international conflicts in our world today.

Our first article is on the “Pakistani Pashtuns and the Endgame in Afghanistan” by Razia Sultana and Saira Aquil. The Pashtuns are a national group split in half by the current border between Pakistan and Afghanistan. The Durand line that divides this national group was drawn by the British in 1893. The British retained control of the area to the East of this line, but the Pashtuns in Afghanistan gained independence under Amanullah Khan in the 1920s. In Pakistan the Punjabis outnumber the Pashtuns, while in Afganistan the Pashtuns make up the largest ethnic group. Yet, despite the Durand line, the Soviet occupation of Afghanistan, and the current international occupation led by the United States, Pashtun loyalties to their brethren across the Durand line are stronger than their loyalties to their respective political states.

Pashtuns in Pakistan have supported Pashtuns in Afghanistan when attacked, and harbored them as refugees from war across the relatively porous border. This helps explain why the Taliban who have arisen from their ranks have found safe haven in the somewhat autonomous Northwest territory of Pakistan, and why they have also been a challenge to Pakistani rulers.

Before the US-led occupation of Afghanistan, Pakistan relied on the Pashtuns to create a security buffer on their Western border. Keeping Afghanistan divided and weak has also been an objective of Pakistan’s military forces. However, after 9/11 Pakistani military rulers sided with the United States in the war on terrorism and thus alienated themselves from many Pashtun people. These dynamics have caused some elements in the Pakistan government to side with the Pashtuns while others side with the US and provide intelligence for attacks on Pashtuns with US drones. Now, with the planned withdrawal of international forces from Afghanistan by 2014, Pakistan is in a quandary that our authors describe in detail. It will be important to understand the Pashstuns as a natural cultural group for any peaceful solution to violence in Afghanistan and Pakistan in the power vacuum that will develop when foreign occupation ends.

Our second article is “The U.S. and the 1945 Division of Korea: Mismanaging the ‘Big Decisions’” by Mark P. Barry. As World War II was drawing to a close, both the U.S. and the Soviets were expecting to have a role in Korea based on negotiations between Roosevelt and Stalin at Yalta and prior,  where the U.S., Russia, and China would jointly work to bring full liberation to Korea. After the U.S. dropped the first atomic bomb on Japan and Russia prepared to attack Japanese troops and occupy Korea, U.S. General George A. Lincoln and his staff settled upon the 38th Parallel as a minimum policy objective for U.S. forces. This became the line that has separated the Korean people ever since, except for short periods during the Korean War.

The division of Korea imposed two ideologically-opposed systems of rule on the once-homogeneous nation. One system pushed self-reliance and economic competition and the other pushed loyalty and subservience to the will of the ruler with no incentives for economic development. This division fostered such different levels of education and economic development  that many people in the South wonder whether political integration is now even desirable, yet culturally Koreans in both the North and South still believe they are one people.

Barry argues that the hasty, and almost accidental division of Korea caused by outside forces that had little knowledge of, or regard for, Korean culture obligates the U.S., Russia, and China to work to find a way to end the bitter rivalries, restore peace to the Korean peninsula, and to bring an end to the state of war that has formally existed despite the 1953 Armistice Agreement.
Our third article is “Universal Peace Through a Balance of Science and Religious/Cultural Practices” by Ganesh P. Pokhariyal. He has dedicated his article to Rev. Sun Myung Moon, the founder of the Professors World Peace Academy which publishes this journal (see “In Memoriam,” p. 87). From 1973 to 2000, Rev. Moon sponsored over 20 major International Conferences on the Unity of the Sciences (ICUS) with themes related to the topic of science and values and universal values. Pokhariyal attended several of these conferences and has been active in Professors World Peace Academy activities in Kenya.

Pokhariyal, a mathematician and physicist, asks us to look once again at natural law, a concept popular in the days of Montesquieu and the U.S. Founding Fathers that fell into disrepute with the rise of modern secularism in the West. Pokhariyal argues from his background in math and physics that in the post-modern world there is still  an important place for religion and mystical explanations for events that are not fully understood, even by science.

His attempt to provide a new balanced understanding of the roles and relationship between science and religion (or normative cultural values) refers to the idea that there are universal principles that apply to all societies as well as explanations that fill in the gaps in knowledge. He argues that scientists themselves often attempt to fill in the gaps with theories and hypotheses that are nothing short of mystical belief. From his standpoint as a mathematician, he sees in science the same type of arrogance in pushing a mystical belief as universal knowledge as is seen by the preceding religious theories that lacked as much knowledge about the universe.

A balanced approach to peace has to recognize both the cultural values that evolved historically to enable societies to flourish, as well as scientific discoveries that might either affirm or disconfirm some of our inherited beliefs. Like the left and right half of the brain each contribute to the whole consciousness of individuals, conventional norms and science each have a role to play in the integral cultural consciousness of a human society.