“Do not ask for transparency from others unless you have provided transparency to them.”—Anderson’s Golden Rule of Transparency(1) 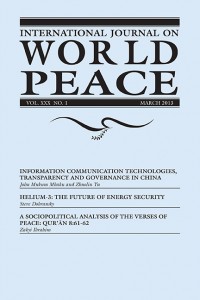 This issue of IJWP has articles on three different topics: Transparency in government, competition for energy resources, and peace in the Qur’an.

Transparency is a major issue for  all social institutions, not just government, because it is an essential aspect of legitimacy in an age where there are many large, complex, and impersonal social institutions. In the family, the most basic social institution, transparency is not a serious issue because the interpersonal relationships are so close that everyone knows what everyone else in the family is doing. If little sister is sick, Dad loses his job, or big brother drives home in a new Mercedes, it is difficult to hide this information from other family members. The same is true in small towns, like my hometown, which had a population of fewer than 300 people. When I delivered the newspaper to nearly every house, and stepped into nearly every kitchen on Saturday to collect for the paper, I knew who was sick, who was on welfare, who was distraught, and who was cheating on their spouse. This “natural transparency” does not exist with the impersonal relationships in large cities or modern bureaucratic social institutions, whether they be governments, corporations, or churches. Impersonal distance creates opportunities to hide secrets in a church, to defraud government programs, to cheat on mortgage applications, to use corporate revenues for private purposes, or to engage in insider trading.

Bureaucratic institutions do not get their information by direct contact, but through reports and forms. The people whom these institutions are supposed to serve do not have first-hand knowledge of the personal motives of individual bureaucrats. Institutions want to ensure that people seeking their services are legitimately entitled to them. People receiving services want to know they can trust that a social institution is not misusing funds or allocating services inequitably. This requires transparency. In a family transparency is hard to escape, but in large-scale complex societies it can often be hard to find. A recent CBS 60 Minutes report estimated that $60 billion of U.S. Medicare funds are spent on fraudulent claims.(2) The 2008 housing bubble was caused, in part, by banks receiving and passing off documents that did not disclose the true value of the properties or the creditworthiness of the borrowers that the paper represented.

People always ask other people to be transparent, because they want information that other people have in order to make good decisions. However, people seldom want to disclose information about themselves or their departments, seeking to get away with as much as they can. U.S. President Obama ran on a platform of being a “transparency president,” but the transparency he sought was the transparency of financial institutions the government needed to regulate. When it came to disclosing personal information about his birth or his college transcripts so the voters could better understand who he was and whether he was qualified for the job, a wall went up. He also encouraged whistle blowing for people cheating on taxes or violating other laws, even promising rewards in some cases, but, when Wikileaks blew the whistle on improper U.S. State Department behavior, his administration preferred to prosecute the Wikileaks founder, Julian Assange, and deny him freedom of the press. The New York Times sided with Assange. President Obama is not the only person to behave duplicitously on the matter of transparency, nearly everyone does it; it seems to be built into our human nature. He is just the most obvious and recent example, being in the spotlight as President of the United States.

Economist Joseph Stiglitz received a Nobel Prize in economics for his work on the topic of “information asymmetry.” Since knowledge is power, and information leads to knowledge, people seek asymmetric knowledge to sell more products, design a better widget, win a political election, or win a bet on a horse race. Often the person with the most information, if they have the skill to know how to use that information, comes out on top. Stiglitz observed that even while championing freedom of the press, the press is often complicit in the “conspiracy of secrecy.”(3) The New York Times wants freedom of press, but does not want to disclose its sources to a competitor; Coca-Cola does not want to divulge its formula; a successful investor does not want to divulge his investment strategy; a gold miner does not want to tell people the location of a river bed he knows to contain lots of gold. Information asymmetry gives people advantages in nearly every area of life.

Some secrets are legitimately protected; others are not. There are standards, although poorly developed or enforced, designed to determine whether secrets should be protected or whether transparency should be compelled. Now that we have entered the “information age” some organizations like Wal-Mart have discovered that open information, rather than secrets, can make money. Wal-Mart lets its suppliers access its computer system and follow inventories in stores and ship products when needed.  Wal-Mart can eliminate many of its own paid inventory and order processing personnel in this way.  Opposite the concept of centralized knowledge and control, Wal-Mart found its “open” information system led to greater profitability and competitiveness in the market.

The development of the Internet and spread of information in the West was one reason for the collapse of the Soviet system. It could not compete economically when it tried to centrally control information. U.S. President Clinton and Vice President Al Gore tried to initiate an open information approach to government institutions, but with markedly less success than Wal-Mart. They expanded the Freedom of Information Act (FOIA) and asked department heads to declassify information and to put government budgets and information online. Many old records, from before the time of current bureaucrats, were declassified, but despite Clinton’s efforts to increase information transparency, the rate of new classification increased under his watch. It increased more dramatically under President Bush after 9/11. After reviewing much classified and declassified information, Rodney B. McDaniel, Executive Secretary of the National Security Council under President Reagan, said only 10 percent of classification was “for legitimate protection of secrets.”(4) In other words, 90 percent of classified documents hide “dirty little secrets” about personal use of power and money. Unlike Wal-Mart, governments are monopolies on force and do not have a market incentive to compete. This makes government transparency one of the most difficult social problems in the modern world.

Our first article is on “Information Communication Technologies, Transparency and Governance in China” by John Mukum Mbaku and Zhuolin Yu. In the golden years of the Chinese Empire neo-Confucian values were embodied by government officials who were forced to pass rigorous civil service exams before they could acquire a job. While there were still inadequate checks and balances in that social system, which decayed through corruption in the nineteenth century, those values that placed high expectation on the righteousness of civil servants produced far greater checks on corruption then than either China or the United States have in place today. The Communist Revolution attempted to destroy Confucian values, replacing the corrupt system with a centralized bureaucracy, eliminating that check on the arbitrary use of power.

Mbaku and Yu explain that Chinese government officials and bureaucrats shirk transparency just like most other human beings. Calls for transparency are being loudly voiced because the moral reputation of public officials is at a near all-time low. Mbaku and Yu discuss why the Chinese government should provide greater transparency in information. One reason is that it would provide greater legitimacy of the regime in the eyes of the people. Another is that is would support democratic reforms because if the government is “of the people” the people need the information required to govern. A third reason would be to increase efficiency and root out corruption. Another reason would be to increase the economic competitiveness of the country. Lastly, the authors argue that transparency will bring about a greater likelihood of peace, both within China and between China and the rest of the world.

Our second article is on “Helium-3: The Future of Energy Security” by Steve Dobransky, who discusses this new energy source on the moon, the new space race it has created, and the fact that the United States seems to be losing this space race to China and Russia. One ship load of Helium-3 from the moon, he argues, would provide enough clean fissionable energy to supply U.S. energy needs for a year. This is a pretty amazing claim, given the lack of U.S. media buzz about the topic.

This relates to peace in many ways. First of all, when people and nations have the necessities of life—that ample energy goes a long way to making possible—they are less likely to try to steal resources from someone else. A new energy source like Helium-3 can do just that. On the other hand, natural resources like energy cause wars. “He who controls the spice controls the universe” is the famous line from the science fiction movie Dune, which seems less like fiction when you read Dobransky’s article. We have a 1967 U.N. Space Treaty declaring that other space and other celestial bodies, including the moon “are the province of mankind” and shall be used for “peaceful purposes.”(5) However, human technology continues to develop at a faster pace than human laws that reflect a just use of that technology. Therefore, this energy race, like a gold rush, could  result in unexpected violence, hoarding, or monopolies. No side in this race wants to be transparent or disclose its motives for fear other nations will beat it to a booming Helium-3 energy industry.

Our third article by Zakyi Ibrahim is on the peace passages in the Qur’an. These passages have been variously interpreted to describe Islam as a religion of peace and Islam as a religion of war. Ibrahim, an associate  professor of religion at California State University, argues that the Qur’an, just like other sacred texts, often gets interpreted and proof texted to justify the political and economic interests of groups, rather than understood in terms of its original meaning and sociopolitical context. Ibrahim argues that some of the passages that encourage fighting were meant to strengthen the resolve of those already at war, rather than to encourage war itself. He argues that other passages require Muslims to accept peace overtures of the enemy, giving them a benefit of the doubt, even if past scores have not been settled. Ibrahim argues that both the radical jihadists and non-Muslims who believe that the Qur’an promotes a religion of war fail to understand that Islam, as it was founded, is essentially a religion of peace.

Relying on scripture, whether the Bible, the Qur’an, or Marxism-Leninism, can lead to a problem of transparency in environments where non-official knowledge is forbidden, libraries burned, or heretics imprisoned. These behaviors serve to restrict knowledge in ways that give those in control of orthodoxy asymmetric information and power. In societies that restrict knowledge, those holding alternative interpretations of official writings might be punished. Sacred texts are often revered because they presented additional knowledge beyond what existed before them, and they helped promote the development and evolution of the societies in which they were promoted. A common mistake in the modern scientific world, which itself has not been capable of developing concepts like “virtue” or primary social institutions like the family, has been to reject scriptures out of hand because they are not scientific. Such a rejection is also a restriction on transparency because it can be an attempt by “scientism” to reject information that might be essential in the creation of world peace by making its own doctrines a new form of orthodoxy.