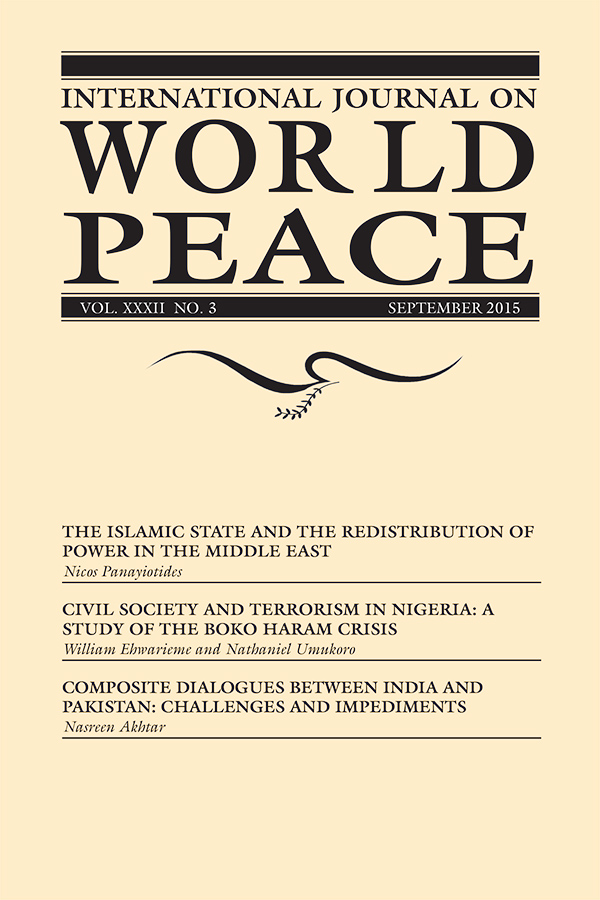 This issue of IJWP looks at contemporary centers of conflict where the goal of protagonists appears to be conquest rather than coexistence. Conquerors insist on imposing their will on others by force and want to control as much of the world as possible. They often justify the conquest by arguing that they are carrying out the will of God, or that they have a superior plan for the world and that imposing their plan justifies murder, rape, displacement of populations, and theft. A conquering group views those not on their side as inferior, and therefore their murder, enslavement, or other violations of rights are acceptable.

On the other hand, coexistence is a notion that every human being has equal value and rights. The United Nations Universal Declaration of Human Rights is a reflection of a global consciousness that emerged after World War II, which recognizes that respect for the rights of others is a higher form of human consciousness and a prerequisite for world peace.

But coexistence runs two ways. When dominant powers marginalize individuals or groups and deprive them of equal opportunity and participation in existing societies, they also deprive them of life on equal terms with dominant groups. This failure to exhibit a consciousness of coexistence by those in power is a form of conquest which, while perhaps not outright murder, can lead to forms of slavery and oppressions such as overtaxation, denial of rights of citizenship, and restrictions on movement or property ownership. Marginalized groups, in turn, adopt a consciousness of unwillingness to coexist with dominant groups, and they use language to denigrate them and view them as inferior. Racism, ethnocentrism, classism, sexism, and religious bigotry are all symptoms of a conquest mentality that has not transcended the consciousness of group self-interest. However, dominant political theories that pursue national self-interest, or strategies to secure the victory of one political party over another, are also a reflection of this less-developed consciousness that has not reached the level of coexistence.

Our first article, by Nicos Panayiotides, looks at ISIS and the redistribution of power in the Middle East. ISIS is a group with a conquest mentality that is seizing territory, stealing property, and killing or oppressing those who will not accept their religious beliefs or their rule. This group is taking advantage of power vacuums left by intrastate conflicts in Syria and Iraq and receding occupations by the great powers—who themselves are acting on strategies of self-interest. ISIS does not accept any existing state boundaries, openly rejects the United Nation’s Declaration of Universal Human Rights, and consciously imposes a form of tyranny on its members.

The disagreement between Russia and the United States over support for Syrian President Bashar Al Assad has destabilized Syria, and regional powers like Jordan and Saudi Arabia have been launching air strikes against ISIS when they have felt threatened. ISIS has become the nemesis of enemies in the region and has no alliance with Turks, Kurds, or Iran, all of which have been drawn into the conflict, causing new regional alignments, even if they might be temporary. The author believes that the United States and Russia, and some of the regional powers, will need to develop an overall plan that transcends short-term interests if the threat of ISIS is ultimately to be eliminated.

Our second article is on Boko Haram in Nigeria. William Ehwarieme and Nathaniel Umukoro explain how civil society may be having a greater impact on this group than state power. Like ISIS, Boko Haram is a militant Islamic organization that has launched attacks on Christians and Churches.An estimated 300,000 people have been displaced by Boko Haram violence. In Nigeria, many civil society organizations are asking both for the state to step up a policing presence, and responding to the Boko Haram violence with a higher consciousness of nonviolent coexistence. This article argues that this nonviolent and inclusive civil society activity has helped to limit the escalation of the Boko Haram violence, while military activity—that often leads to the death of innocents—tends to exacerbate it. Just as Martin Luther King, Jr., won over the silent majority in the United States, an example of love and inclusiveness and a willingness to sit down and solve problems by civil society organizations in Nigeria wins the hearts of the non-militarized majorities of both Christian and Muslim Nigerians.

Our third article, by Nasreen Akhtar, looks at historical conflicts between Pakistan and India by analyzing the differences in success between single-issue negotiations and “composite dialogue.” The author refers to two types of negotiations: the “bargaining” approach of the realists and the “problem-solving” approach of the liberals. In the bargaining approach, groups approach the table determined to maximize their self-interest, strategizing how they can achieve their demands and get the biggest compromise from the other party. Such negotiations tend to be “win-lose” games and, without a dominant power that can outright impose its will through force, these issues tend not to get resolved. India and Pakistan, both following a realist approach, which we could call a sublimated form of conquest mentality, and both possessing nuclear weapons that provide mutually assured destruction (MAD), have never made much progress in resolving any of their border conflicts. The composite dialogues brought some cooperation on international bus and rail transportation, in which both parties gained. Also, some disputes that were submitted to third parties, such as the World Bank or an outside court, which used a problem-solving approach, have seen some resolution in which both countries have honored their commitments to the agreements.

In the end, it appears a problem-solving approach, possibly with the support of some outside arbiter or consensus seems to reflect a higher consciousness that looks at the entire picture rather than fixating on past resentments or maximizing group financial or power interests.

In this issue we also have a commentary piece by our senior editor Morton A. Kaplan, who tries to make an uncomfortable distinction between levels of genocide and murder. He begins by questioning Pope Francis’ equation of the Armenian genocide in Turkey with Hitler’s genocide against Jews. Then he compares the attitude of Palestinians and Israelis towards murder of their respective citizens by members of the other groups. While all murder should be considered evil, there is a difference between celebrating it and considering it an unfortunate consequence of group survival.