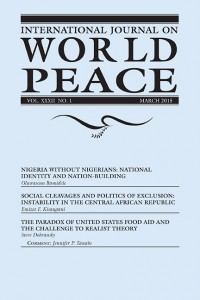 All three articles in this issue of IJWP are concerned with interest group influence on state policy and the negative effects it creates. In On War, Carl von Clausewitz described war as “politics by other means.” In this assertion, he recognized that “politics” is a contest of power over control of governance and resources and not necessarily “governance” itself. Politics tends to be about who controls power and not about how the political system operates successfully. In a realist world, political science often becomes a study about how an interest group can achieve its own end, not how the system can be prosperous, just, and stable.

A working system of governance should be “non-political” in the sense that it is based on universally accepted principles, the way we accept the principle of gravity. Despite ideology, ethnic background, or desire to achieve a specific end, if you walk off a cliff you will fall to your death. A natural principle trumps political will. Inevitably, failed states are those whose rule of law did not respect principles of good governance. This is why good political science should be focused on the principles of functional political systems, rather than the science of how an interest group can assert itself over others. The science of how a particular group can achieve its ends will always lead to collisions with other groups doing the same, and this makes political science the science of deliberate conflict instead of a science of peace or justice.

This issue contains a review of Jennifer Curtis’s Human Rights as War by Other Means: Peace Politics in Northern Ireland. Curtis posits that rights discourse is just as likely to legitimize violence and provide new avenues for conflict as it is to promote peace and social justice. She argues that human rights discourse also functions as a war by other means. This is inevitable when people are focused on demanding rights for their own group, and not advocating a system in which the rights of all are treated the same.

The U.S. founders designed a political system whose goal was to curb self-interested political behavior. They were “realists” in that they attempted to design a system of laws that would prevent interest groups from manipulating government for their own ends. They wanted a system in which politics was not war by other means. Checks and balances were designed to thwart the power of political parties, monied interests, and the power of the central government. Unfortunately, today we see that self-centered groups have escaped from their original restraints and attempt to assert their will over the other citizens of the United States, creating arbitrary laws through two political parties focused on serving their contributors at the expense of the people.

The first article, “Nigeria without Nigerians: National Identity and Nation-Building,” looks at the problem of creating a Nigerian national identity out of sub-national groups. The author argues that the anti-colonial groups could agree that they were against British colonialism, but not for any common interest other than the self-determination of many dissimilar sub-national groups. The rise of Boko Haram in the North and the launching of Southern Nigeria Peoples Assembly for the unity of the South indicate efforts of subgroups to consolidate power in order to control the state. Unfortunately, these groups are not promoting a common Nigerian identity that would serve as the basis for the system of governance that provides equal opportunity and justice for all Nigerians and some, as in the case of Boko Haram, use violence to force their sub-national agenda on all of Northern Nigeria. This is another case of politics as war by other means.

The second article, “Social Cleavages and Politics of Exclusion: Instability in the Central African Republic,” is an acknowledgment that each successive regime in the Central African Republic has engaged in excluding other groups from power as a strategy of self-favoritism. The article has the thesis that “politics over principle” causes political violence and social instability. While states are territorial entities, not economic producers, there is an effort by controlling groups to view a state as a source of economic income, not only in Africa but throughout the world. States may have natural resources or people on their territory that can be exploited by a subgroup at the expense of all, but they do not generate wealth; that comes from economic productivity. To manipulate state politics as a source of income for some groups and not others is unprincipled and inevitably a form of corruption and structural exploitation that should be checked by its system of laws.

The third article, “The Paradox of United States Food Aid and the Challenge to Realist Theory,” discusses how interest group politics in the United States (in this case agricultural lobbies) contribute to both the lack of food self-sufficiency and overpopulation in some of the most poverty-stricken areas of the world. It is not in the self-interest of the U.S. agricultural lobbies to see agricultural development in other countries. Other food suppliers would be their natural competitors. The agricultural lobbies, using the rhetoric of helping starving people, are manipulating government policy for their personal advantage while causing more harm than good for those they profess to help. While original intentions of this policy may have been noble, the systemic policy changes these lobbies caused are creating long-term negative outcomes.

Reliance on interest group politics and the failure to analyze systemic principles is a prescription for social disaster that repeatedly plays itself out in our contemporary world. The U.S. housing bubble of 2007 is another example: banking and construction lobbies manipulated the U.S. Congress to offer unsustainable and unprincipled loans to enrich their own businesses. This caused a systemic banking collapse and, when the big banks who helped create the problem failed and were bailed out through the use of politics, the largely innocent small banks and homeowners ended up paying the price for the greed of the larger banks and government legislators under their influence.

There is a reason that statues of “justice” are blindfolded; it is a recognition that all citizens are to be treated equally without prejudice. However, laws created by interest group politics are, by definition, “with prejudice,” and the structural injustice such laws create is inevitably borne by those who do not have political power.

It is in the interest of peace and prosperity to have laws that do not use government power to reward one group at the expense of another. The U.S. system in Washington is broken. Political lobbying can bring a thousand-fold return. There is hardly a business more lucrative than hijacking a government. Top corporations listed on a Sunlight Foundation Study got nearly $1,000 in return for each dollar spent lobbying. This report did not include the rewards reaped by labor unions and government agencies that are also lobbying for subsidizing their own welfare with tax dollars. None of the lobby groups, left or right, are concerned with the system as a whole, yet such activity is taken for granted by the media who, if they were acting as watchdogs on the behalf of all citizens, should be outraged.

In conclusion, the wars around the world causing massive displacement and poverty are simply more violent expressions of contests over power than what we find in the politics of Western governments that allow interest groups, more than citizens, access to the corridors of power and legislation. Realist political “science” used to promote interest group politics rather than systemic principles of justice ends up doing a disservice to society. However, a political science that aims at serving society as a whole, and is truly “realist,” will seek to curb special interest politics and create a system of equal, and “blind,” justice for all.