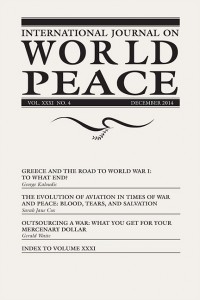 The year 2014 marks the 100th anniversary of the outbreak of World War I (WWI), the beginning of modern mechanized war at the global level. WWI represented a watershed in which war fought between traditional kings and their armies was transformed into wars among states whose policies are determined by political parties and bureaucrats. It also represented a huge technological shift, beginning with rifles, bayonets, pistols and calvaries, and ending with mustard gas, tanks, submarine torpedoes, and airplane bombs. Modern weapons of mass destruction do not easily distinguish between soldier and civilian, or confine themselves to traditional geographical borders. Traditional armies were decimeated by new weaponry, and the collateral damage on civilians escalated as well. Nearly 20 million people died in WWI; half were civilians.

The article, “Greece and the Road to World War I” by George Kaloudis, focuses on the nature of nation-state alliances and the configuration of great powers vs. smaller powers. It discusses the impact World War I had on a smaller state. Smaller states were lured into alliances with larger powers both for promises of protection and promises of a share of victory spoils. In the case of Greece, the war divided the nation internally as the king sided with the Central Powers while the democratically elected leader sided with the Allied Powers. The goals of modern democratic states are often determined by large institutional interests, rather than the head of state, as described by outgoing U.S. President Eisenhower’s famous warning about the “military-industrial complex.”

Kaloudis describes how Greece reflected this watershed in its internal politics between king and democracy. King Constantine had accepted Prime Minister Eleftherios Venizelos’ resignation twice early in the war, but by the end of the war Venizelos was again Prime Minister and Constantine was living in exile, symbolizing the triumph of the instituional state over royal families.

The U.S. began the war officially neutral. When France asked for a $100 million loan when the war broke out, William Jennings Bryan, the U.S. Secretary of State, denounced such loans and the Wilson Administration forbade them. However the economic profits made on selling war supplies by private businesses to the Allies soon tilted U.S. leadership towards the British and French. As the war proceeded, Henry Davidson of J.P. Morgan bank was able to convince the administration that loans to the Allies were necessary for them to purchase American goods and develop the economy. War profiteering and price gouging followed the loans, making some Americans rich on the desperation of the Allies. This prompted the British Ambassador to Washington to lobby for a procurement office that would curtail the plundering and keep prices in check. Edward Stettinius, president of Diamond Match Co., was recruited to manage a new centralized military procurement office at a building owned by J.P. Morgan & Co. As Ron Chernow tells the story:

Stettinius became the single most important consumer on earth, rounding up $10 million in goods per day. He bought, shipped, and insured supplies on an unprecedented scale and stimulated methods of mass production. As word of his operation spread, 23 Wall Street was mobbed by brokers and manufacturers of every description; the bank had to post guards at every door and assign them to partners’ homes. Each month, Stettinius presided over purchases equivalent to the world’s gross national product a generation before. He bargained hard for corned beef and barbed wire, locomotives and artificial limbs…

By war’s end, the United States had an arms-making capacity that eclipsed England and France combined. For his efforts, Stettinius would bear the unlovely tag of father of the military industrial complex.1

The Germans could hardly view the U.S. as neutral when it was fortifying the Allies with supplies. They sent submarines to the North Atlantic Ocean to sink the war supply ships, including the famous Lusitania in which 128 American passengers were killed. When the U.S. finally entered the war in 1917, it still had less-than-popular support. Most Americans west of the Mississippi opposed the entry and accused the bankers of promoting a pro-war posture. The millions of Germans and Irish living in the United States opposed a U.S. alliance with England, and Jews in America were opposed to siding with Russia, which was engaged in pogroms against Jews there. Even so, President Wilson armed U.S. merchant ships by executive order and convinced Congress to enter the war after a number of merchant and passenger ships had been attacked by Germany. Six months later the U.S. declared war against Austria-Hungary as well. An unfettered economic sphere had been responsible for dragging the U.S. into the war.

Airplanes were part of technological advance that rendered traditional forms of warfare obsolete. The war began with pilots shooting pistols and ended with planes equipped with machine guns and bombs. The article “The Evolution of Aviation in Times of War and Peace,” by Sarah Jane Cox, takes a look at the dynamic relationship between the evolution of aviation and society, for purposes of both peace and war. This year marks the 70th anniversary of the Convention on International Civil Aviation in Chicago, born out of the ashes of WWI, which began 100 years ago. Since that convention was signed, globalization has increasingly developed, and the airplane has played a significant role in this. However, regulations have not kept apace with either social or technological changes. The concept of absolute state sovereignty does not have the power it did 70 years ago, as many social institutions have become global. Aviation is one of those instituions. She makes a case to revisit and update international aviation conventions in ways that serve the cause of peace and human happiness.

The article, “Outsourcing War” by Gerald Waite, is about the Vietnam War, but it raises the issue of war in the 20th century moving from the hiring of mercenary soldiers to the employing mercenary states. In particular, White explains that recently declassified documents from the Vietnam era show that South Korea was less in the war as an ally than as a mercenary state. South Korea not only received reimbursement for all the costs of outfitting and paying the soldiers who fought in Vietnam, but received economic development funds as an incentive to engage in state-sponsored mercenarism.

Waite’s recent interviews with Vietnamese who were on the side of the Viet Cong during the war indicate that Korean soldiers would kill everyone—men, women and children—as their performance was largely evaluated by body count. Amercians who were drafted, and not professional soldiers, were more likely to seek out the real perpetrators and spare the lives of those the innocent.

The idea of being financially rewarded for serving a war effort, whether it be as military arms supplier, another state, or as a mercenary soldier, raises ethical questions that should not be ignored. Killing others becomes easier when it is profitable. Killing also becomes easier to ignore when someone else does the killing at a distant location where wailing and bleeding are not experienced by those declaring the war. Professional armies, intelligence agencies, and foreign allies can be used by democratic states in ways that average citizens find abhorrent. Other types of current third party approaches to peace and war include using UN peacekeepers and remotely controlled drones, both of which have had morally questionable results.

Our first book reviewed, Crafting State-Nations: India and Other Multinational Democracies, provides a novel approach to governance of multi-national states by advocating the term “State-Nations” rather than “Nation-States.” In other words, it looks at what collective “national” roles are appropriate for a state with a pluralistic society. And today, with global transportation and migration, the idea of a homogeneous state is more a fiction than a possibility. Collective security of personal rights with widely decentralized and asymmetrical cultural elements are considered most conducive to peace. Such rights are generally considered to be “negative rights” in that they can be guaranteed by laws, which is the natural domain of the state. Positive rights, the right to be loved, to housing, or a livable wage, on the other hand are not produced by states but by the cultural and economic institutions. When “nation-states” try to provide a positive right, it is similar to trying to impose religious law, like Sharia law. Inevitably such laws commit some form of cultural discrimination and oppression. Whether or not using the term “State-Nation” adequately solves the problem, it certainly recognizes potential violence in the common understanding of “Nation-State.”