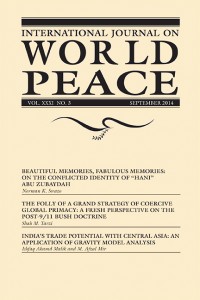 This issue of IJWP begins with an article by Norman K. Swazo on the biography of the jihadist Abu Zubaydah, who has spent many years in Guantanamo Bay detention. It is the story of a young man struggling with a conflicted identity rooted in his own upbringing in a rigid Islamic family in Saudi Arabia and his experiences related to more complex and secular Western societies. The meaning this young man came to find in a jihadist movement was only reinforced by the post-9/11 Bush doctrine that advocated the use of preemptive violence against perceived American enemies. The folly of the Bush strategy is discussed by Shah M. Tarzi in our second article.

Violence is an innate biological reaction to frustration that is inherited for self-preservation. We see young babies screaming, kicking, and waving their arms wildly when needs are not met and they know of no other way to get milk or a diaper change. We are also too aware of the fact that most of human history has been about conquest, plunder, and rape—forms of violence employed to achieve personal or state ends. The main focus of this journal, and of the entire field of peace and conflict studies generally, has been to move beyond violence to civil behavior and cooperation. The “Seville Declaration” of 1986 declared that “biology does not condemn humanity to war.… How we act is shaped by how we have been conditioned and socialized.”1 Non-violent modes of interaction can be learned, and can lead to resolving frustrations and achieving human goals.

One method of mutually beneficial interaction is trade. In trade we can achieve resources we need through exchange, not violence. Our third article, by Ishfaq Ahamd Malik and M. Afzal Mir, examines potential for trade between India and Central Asian countries, like Pakistan, Afghanistan, and other states with which India has often been at war. The authors explain the use of the “gravity model of bilateral trade” that can be used to understand trade potential between countries. This model is an example of understanding one principle, and the mutual responsibilities associated with it, that can be learned and applied to replace the use of conquest and theft of resources. In advanced trading situations, both countries end up more prosperous and peaceful than the victor would in a conquest situation. But trade not only implies economic rights, but includes correlative responsibilities.

Responsibilities require learning and skill. In order to be useful to a trading partner, one has to produce something valuable. This requires some knowledge and productivity. People without the necessary skills or resources for trading can be compared to that helpless baby that cries out for help from its mother. And, just as a baby eventually has to learn to feed itself, homo economicus must learn productive economic activities that do not require theft or handouts from others.

Our book reviews emphasize the complex nature of modern society and the many factors and principles that must be weighed in understanding situations of conflict, the causes, and solutions. Each situation is related to issues of security, culture, and economy that are at different levels of development based on the history and general consciousness of a society. The more that social conflicts can be understood as the interaction between two complex systems, rather than with simple ideological or reductionistic linear solutions, the greater our ability to replace violence with solutions derived from higher levels of consciousness.

In this regard, it is useful to remind ourselves that our objective cannot merely be “rights.” The UN Universal Declaration of Human Rights is an advance in social consciousness over violence because it recognizes that every human being has an equal right to life and social participation. It is a recognition that we share the world into which we all were born. Today our news media is highly sensitive to human rights and often reports on issues of discrimination—racial, sexual, religious, or national, for example—but, as Terry Beitzel’s article in our last issue reminds us, an “ethic of responsibility is the basic human responsibility of self-governance, which includes a concern for human needs.”2

Being totally focused on our rights will not lead us to peace. The work of the world must be done by people who produce things valuable to others, and are thus aware of the needs of others and not totally self-focused. Peaceworkers, as well as others, must be aware of the fact that governments cannot simply be asked to provide for everyone’s needs. Governments can provide security needs, and their laws can help curb massive inequalities of wealth, but they are not economic producers. Dependence solely on government agreements can be a first step, but it is not a solution to conflict. Conflicts are more often rooted in self-focused cultural consciousness and undeveloped economic capabilities.

For a peaceful world to come about, both individual consciousness and social consciousness must develop concepts of responsibility that come on a foundation of a recognition of universal human rights, and not rights centered on a race, religion, or cultural group. The world could move one step closer to this if, in addition to the UN Universal Declaration of Human Rights, we could globally develop a set of human responsibilities. Justice can be claimed, but it cannot fulfill itself. For this, love is required. Love is the supererogatory behavior of going beyond the self, beyond the principles of justice, to the responsibilities related to caring for oneself, others, and the earth as a whole.