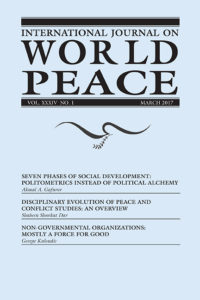 The application of systems theory to social development has not been popular in political science for decades. Strategic thinking and conflict resolution have dominated, perhaps because they are employed to achieve immediate goals. But the refugee crisis created by the “Arab Spring” has forced some to conclude that a benevolent dictatorship is a precondition for democracy, and that toppling dictators and holding elections only brings anarchy and terror. This issue of International Journal on World Peace examines social development and the idea that creation of more democratic societies, or even academic fields like peace and conflict studies, is evolutionary, rather than revolutionary.

The first and third articles argue for an emphasis on stages of social development in which middle-class owners and civil society—not mere elections—are prerequisites to a democratic society. Our second article argues that the field of Peace and Conflict Studies has evolved in stages following wars that take on new dimensions when mechanisms for preventing former wars are circumvented.

Our first article comes from Uzbekistan, a former Soviet Socialist Republic. The author, Akmal A. Gafurov, was trained in Marxism-Leninism and, since the collapse of the Soviet system, has engaged in seeking more clear theories of social development. His research and study led him to conclude that Marxism-Leninism, and indeed most theories of social development promoted all over the world, are like alchemy. After Mendelev developed an understanding of the atomic nature of elements that led to the atomic chart, the books of the alchemists who would create gold from potions and other magical acts were discarded. Gafurov argues that developing sound scientific knowledge about the stages of social development will do the same thing to the rhetoric of nearly every political party and revolutionary theory on earth today. This is a big claim. However, we believe it is an article that should be taken seriously.

Gafurov was clearly impressed with the work of Daron Acemoglu and James A. Robinson in Why Nations Fail: The Origins of Power, Prosperity, and Poverty (reviewed in the March 2015 issue of this journal). That book analyzed political systems of countries of the world and the degree of their well being. Their conclusion was that the key to the elimination of poverty and ultimately to the creation of prosperity lies in changing political regimes from authoritarian to free, liberal, and democratic ones. But there is no simple prescription for this because, out of 180 ostensibly free and democratic nations, only 32 are prosperous and the others flounder in corruption or become failed states. Gafurov argues that the prosperous states have (1) a large number of middle-class owners, and (2) a vibrant civil society. He concludes that revolutions do not create such conditions, but that they emerge out of the development of dictatorial societies that have been humanized.

Arguing for an evolutionary, rather than revolutionary, approach, Gafurov distinguishes between constructive elements and destructive elements. Coming from a post-religious society, Gafurov uses these terms in a way analogous to good and evil, where constructive elements lead to, among other things, an increased median income for people living in the society. To achieve this, he argues middle-class owners and entrepreneurs who can shed themselves from a “slave consciousness” that looks to corporations or states for jobs or welfare is required. This slave consciousness he refers to was promoted by the communist system in the U.S.S.R. However, it applies to people and political parties the world over.

The second article, by Shaheen Showkat Dar, provides a broad overview of the tension between peace and conflict and the emergence of the academic discipline of Peace and Conflict Studies. He views peace and conflict in terms of wellness and illness. He divides this evolution into four major periods which began with major wars and conclude with the emergence of new theories of peace. The first period begins with the Thirty Years War which was concluded by the Peace of Westphalia, the idea of the modern nation-state, and the rules for just war developed by Hugo Grotius. The second period begins with World War I and goes through World War II, followed by global institutions of war prevention culminating in the United Nations, and the origins of the field of peace research with Quincy Wright’s A Study of War (1942). The third period is the Cold War period, marked by a bi-polar world and nuclear weapons in which peace studies programs and interdisciplinary research was established at universities around the world. The fourth period followed the collapse of the Soviet Union and the rise of global anarchy, with the rise of within-state and trans-state conflicts and terrorist actions taken out against general populations rather than between armies. This fourth period poses new types of conflicts that have not been sufficiently studied or methods of conflict resolution successfully understood.

The third article, by George Kaloudis, is an overview of NGOs as a major feature of civil society in our post-Westphalian world. The rise of NGOs somewhat parallels the rise of peace and conflict studies discussed by Showkat Dar in the second article. There are three general spheres in modern society: civil, governmental, and economic. NGOs are social institutions, like governments or corporations, only in the private, voluntary sphere. It can be argued that NGOs form the third leg of the stool upon which just and prosperous modern societies stand. Institutions, like individuals, can be a force for good or evil, and Kaloudis provides examples of both good and bad NGOs. On the whole, Kaloudis believes NGOs are a force for good.

All three of the authors frame their values in different, but polar, language: Kaloudis uses the terms “good” and “evil,” Gafurov refers to constructive and destructive social elements, and Showkat Dar refers to social “wellness” and “illness.” While these terms emerged from Western culture, secular culture, and Asian culture, respectively, they all refer to ideals for society that are very similar and complementary. Discussion of values in the modern world has been difficult because debate has been tied to cultural beliefs, but these authors, from three distinct cultural backgrounds discuss their values in ways that can be understood by nearly all students and professionals of peace studies.