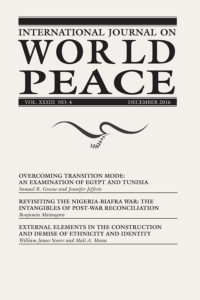 In this issue of International Journal on World Peace, three articles probe the creation of peaceful and legitimate states. Since the rise of modern democracies, people have believed that having elections would make states legitimate because every citizen would have a right to participate in governance. Such simple views fail to ask whether (1) the governance system gives all groups access to power, or (2) whether people are capable of voting as responsible citizens.

The recent events related to the “Arab Spring” began with euphoria and largely ended in despair as violence, starvation, and millions of refugees were the product of what was intended to be a transition to better Arab societies. In some cases, the opposite results of what the Arab Spring promoted were created, for example the emergence of ISIS in Syria, Iraq, and Libya filling the vacuum of failed states. This led many to conclude that arming rebel forces, or attempting to occupy a foreign country, was counterproductive and that the refugees were the result of the policies of the Bush and Obama administrations and their allies. Many American citizens began to side with Russian President Vladimir Putin’s view that the Syrian regime of Bashar al-Assad should have been supported and humanized by improving human rights, rather than by arming rebels to topple the regime and creating chaos.

How are regimes best transitioned? What might lead to transition failure? The first article, by Samuel R. Greene and Jennifer Jefferis, is titled “Overcoming Transition Mode: An Examination of Egypt and Tunisia.” It examines the popular idea that continuity with the previous regime will have better prospects for success than a complete break from the previous regime and uses Tunisia and Egypt as examples. Surprisingly, Egypt had greater continuity and more elections than Tunisia, but it failed to transition, whereas Tunisia, which created an interim government and a new constitution seems to have some chance of successfully transitioning.

Greene and Jefferis argue that consensus among groups, and a sense by all that government will not treat them unfairly is important, and that Tunisia’s new constitution, while not giving every person or group their ideal wishlist, gave all a sense that they were not going to be oppressed or exploited either by the government or by groups with particular views—like those supporting Sharia law. Egypt, on the other hand, had many elections—maybe too many. Mohamed Morsi became Egypt’s democratically elected president, but one year later, following massive demonstrations, was thrown out by the military and arrested. The institutional transition process and elections had failed to deliver a leader seen as legitimate in the eyes of many. Further, it had left the military and courts, and their entrenched interests intact.

Another factor, perhaps not fully developed in the article, is the role of outside forces in shaping a transition. Tunisia’s transition was led by domestic non-governmental institutions that had the respect and confidence of most citizens, whereas other transitions in the so-called Arab Spring involved outside powers’ interference through arms supply, aerial bombing, military occupation, or demands for elections. None of those countries relying on outside help have transitioned very successfully.

Our next article, “Revisiting the Nigeria-Biafra War” by Benjamin Maiangwa, examines the transgenerational effects of civil war and the legitimacy of a state. Since Nigerian democratic elections in 1999, there has been a renewed push for the creation of Biafra owing to the marginalization and transgenerational trauma of the people belonging to the Igbo ethnic group as a result of the Nigeria-Biafra war of 1967-70. This article argues there has been a lack of reconciliatory programs to address the trauma, grief, and grievances of those who suffered. Four “intangible” elements of reconciliation are proposed: an acknowledgment of, and apology for, past wrongdoing, memorialization, and mediation. The paper also engages the critical question of how long after a conflict issues of reparations, justice and, particularly in the case of post-war Nigeria, autonomy and sovereignty remain relevant.

The third article looks at the creation and dissolution of ethnic identities. One of the most serious contemporary problems is when ethnic groups fight over control of a state, rather than having a state identity in which all group identities are considered to have equal standing. In this essay, William James Stover and Mali A. Mann note that different cultures have made contact in different ways. Some seek domination, others submit; some accommodate and barely survive, others succumb. This contact facilitates the process of identity formation and development. Their essay identifies several types of cultural interaction and how they might affect identity construction: segregation inhibits identity, contact fosters its beginning; diffusion transforms two identities into a third; domination encourages resistance; and genocide may cause the destruction of cultural identity.

They state that cultural genocide may be as active in institutions of the state as the desire of a dominant cultural group to destroy the cultural identity of a minority. They also argue that the attempt to destroy a cultural identity causes minorities to resist and become less tolerant of other identities. This argument would apply equally, for example, to a secular state attempting to force secular values on religious minorities, or a religious state attempting to impose an official religion on those who do not believe in it.

All these articles point to the general problem that, since the Treaty of Westphalia, there have been few states that have struck the right balance between the limits of state power vis-a-vis group identities, and the limits of state identity vis-a-vis group power. The principle of subsidiarity, which provides the greatest responsibility to the lowest levels of society, provides the greatest freedom for groups to organize peacefully in a multicultural society—which modern societies tend to be. Unfortunately, human nature is such that the majority of people have wanted to be cared for by higher levels of government rather than caring for themselves and their group. Counties tend to ask states to do things counties could do, and states tend to ask federal governments to do things that states could do better. Further, rulers tend to want to impose their own vision on those they are supposed to serve, rather than allowing them to live their own lives as they wish.

While traditional societies addressed questions of human nature and responsibility through religions, or laws decreed by kings, they have not been well articulated in secular societies and pluralistic states. It is likely these problems of group identities in modern states will continue until issues of human nature and responsibility can be better understood in the contemporary world.