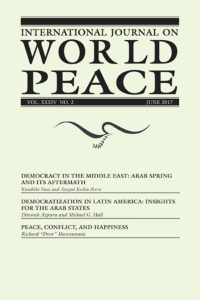 This issue of IJWP focuses on the prospects for democracy in the Middle East. The larger question behind this is whether democracy is the most desirable form of government for the Middle East, or for anywhere else in the world. In the March 2017 issue, Professor Gafurov argued that democracy is a stage in social development that is higher than rule by dictatorship, the most common form of government in the Middle East. In the mathematical model of social and political development that he described, societies require large segments of the population that are morally constructive (M) and economically self-sufficient (E), and that democracies require a large number of middle-class owners and a vibrant civil society. Democracies require people who largely do not rely on government for anything except freedom and security. The Middle East countries whose economies are based on the sale of oil, whose oil proceeds are distributed through the state, do not have large numbers of citizens who are economically independent from the state—an E deficit. The religion of Islam, to the extent it promotes ritual and obedience, rather than creative inquiry, would mean an M deficit. These factors argue against the possibility of achieving democracy in the Middle East any time soon.

Many people in the West would like to see democracy bloom in the Middle East, and the Arab Spring movements there that the West supported reveal that many individuals aspire to democracy, or at least the moral and economic independence they see in the West. However, if the Arab Spring taught the world one lesson, it was that giving a democratic vote to people unprepared for democracy is likely to make conditions worse than the dictatorship they experienced before a democratic revolution. Democratic evolution, as opposed to revolution, might be a more possible path to democracy, as evidenced by the developments in Tunisia that preceded the revolutionary Arab Spring fervor that resulted in disaster. This issue of IJWP contains two articles that examine this question.

The first article, “Democracy in the Middle East: Arab Spring and its Aftermath,” by Kunihiko Imai and Aysegul Keskin Zeren begins by observing there is increasing democratization in the world as a whole but that the Middle East “has remained stubbornly resistant.” Yet, they note that those who argue that Islam and democracy are incompatible cannot explain the persistence of democracy in some Islamic societies like Turkey. Some have blamed the “democracy deficit” on colonial powers, or authoritarian regimes, but the failure of the Arab Spring “complicated the existing explanations of the democracy deficit in the Middle East.” The authors argue for a paradigm shift for analyzing authoritarian persistence, and propose, along the lines of Gafurov’s theory, to “provide insights into methodology and economic measurements.”

Imai and Zeren argue that there is no inherent reason that Islam is incompatible with democracy. Because “democracy” is such an ill-defined term, they chose to measure democracy with indexes of freedom. They noted a significant distinction between “electoral democracy,” the right to vote at the ballot box, and “liberal democracy,” or political freedom. They note that the Arab world has remained significantly behind in terms of electoral democracy, but not in terms of liberal democracy. Islam was positively correlated with liberal democracy, while oil was most highly correlated with the elite’s ability to hamper the development of electoral democracy. Imai and Zeren also argue, against critics of modernization theory, that modernization in the Middle East does correlate with the rise of liberal democracy, even though it does not correlate with electoral democracy.
Our second article, by Dinorah Azpuru and Michael G. Hall, looks at “Democratization in Latin America: Insights for the Arab States.” They begin by noting that in the early 1980s Latin American states were nearly all dictatorships and many people could not imagine them changing to democracy any more than people imagine Arab states are capable of democratization today. They also begin by observing that Tunisia is the only positive example of recent attempts at democratization in the Middle East. They want to apply lessons from democratization in Latin America to the Middle East. Their research “focuses on the structural conditions behind democratization, in particular conditions of economic development, inequality, resource endowments, ethnic heterogeneity and past experience with democracy.”

Our third article is on “Quality Peace,” by Richard “Drew” Marcantonio. By “quality peace” Marcantonio specifically views neither the “absence of war” nor “the absence of structural violence,” as adequate definitions of a “quality peace.” A quality peace is more correlated with human happiness than with whether a nation is at war. He asks two questions. “Does a free-market, as called for in a liberal peace, lead to the economic equality levels often necessary to maintain peace? And is democracy always antecedent to peace or can peace be present even in those areas where democracy does not exist?”

A neoliberal peace “builds upon the economic and governmental principles of a liberal peace, but recognizes potential inequities in a free-market trade system and in wealth distribution within states, and the need for a quality of life ‘floor.’” “A hybrid peace recognizes that democracy may not be necessary for peace in states where there are deep, long-standing locally legitimate institutions, customs, practices, and actors that promote and sustain the functioning and stability of the state, those that enable people to experience a happy, quality life.”

Happiness is strongly correlated with “GDP per capita, social support, healthy life expectancy, freedom to make life choices, generosity, and freedom from corruption,” and a requisite of quality peace. Marcantonio finds that “quality peace” is not strongly related to some traditional factors like the absence of war or conflict, and may not be best analyzed at the state level. He suggests much more research in peace studies could be conducted along the lines of quality peace, or what leads to human happiness.

This brings us back to the original question as to whether ending war, resolving conflict, or promoting democracy should be the main concern of peace studies, or whether these may simply be a means of moving a level above oppressive dictatorships but still far from achieving human happiness. The U.S. Founders considered their constitutional and representative government, which curtailed the excesses of democracy, as being in the interest of citizens’ happiness. If the concept of quality peace is further pursued, it may one day be discovered that politics, like war, is opposed to peace. If politics is the art of fighting over resources by other means than war, then politics might be a symptom of a society in which the best principles of governance for attaining quality peace are unknown, or do not exist. Where governance systems are functioning to provide the highest quality peace, like a well-tuned automobile, no change is necessary and therefore democratic politics might only harm things. It would be good to develop a notion of “positive politics,” which would mean that a political party would only exist to improve the welfare of the whole, rather than to fight for resources for its constituents.