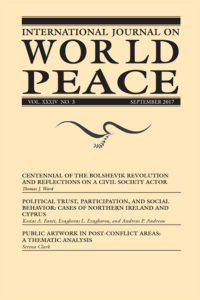 This issue of IJWP coincides with the 100th anniversary of the October Revolution in Russia in 1917. In 19th century Europe, there had been a large-scale industrial revolution created with capital investment that produced massive amounts of goods. Heavy industry produced steel for railroads, ships, and other products that dramatically transformed traditional societies rooted in agriculture, family, and local communities. This social transformation affected businesses, jobs, and lifestyles as much as the internet and smartphones have transformed society and the economy today.

Many people believed that industrial production could lead to a higher standard of living for all and end problems of poverty and war. However, industrial monopolies led to price gouging, surplus labor competing for a limited number of jobs led to unlivable wages, and taxes on profits went to political elites. There was great anxiety and resentment among those who were displaced or underpaid by this new industrial economy. In the second half of the nineteenth century, many socialist ideas developed seeking ways to distribute the fruits of this new economy for the good of all.

Karl Marx was a prolific socialist writer who believed in the industrial salvation of humanity. He argued that if this new means of production were owned by the working class, rather than the “capitalists,” the ideal communist society could develop. Marx appealed to despair and the sense of social injustice and promoted a revolution by the working class to take control of industries, through theft and violence if necessary. His theory blamed all social ills on the selfish and evil exploitation of the workers by the ruling capitalist class. It viewed industries as production mechanisms to be exploited by workers, disregarding principles of how they are built or maintained. Many Marxists promoted class warfare with the fervor of the religious crusades to take the Holy Land from the infidels. Marx’s theory incited riots, class warfare, and conquest.

At the turn of the 20th century, the autocratic Tsarist regime in Russia was incompatible with modern capitalism, and World War I had exhausted Russian resources. Socialism had wide appeal. The February 1917 revolution took control of capital of Petrograd and imprisoned the imperial Romanov family. The provisional government was a power sharing arrangement between liberal aristocrats and the Petrograd workers’ council. Vladimir Lenin returned from exile in Switzerland with his ideology of “Marxism-Leninism.” He took control of the Bolshevik party and further radicalized workers with hatred for the ruling classes and led the October Revolution that replaced the provisional government with rule by the soviets. This led to a civil war between the revolutionary Red Army and the White Army, the existing Army that represented everyone that owned property and resisted communist restructuring. Lenin established a one-party state in which no dissent was allowed.

Lenin was followed by Stalin, who ran the totalitarian state like the leader of a gang, and considered people useful only so far as they obeyed commands of his trusted inner circle. Many intellectuals who had supported the Revolution had been considered “useful idiots,” whose independent thought could no longer be tolerated. After the former ruling class, they were among the first executed by the communist regime. Large construction projects and industries were built under Stalin with the help of the slave labor of prisoners who had been critical of the regime. Following Stalin, leaders used global expansionism, the Cold War, and the domination of client states to maintain their power. But, a state central planned economy that ignored market forces and human incentives never worked, and eventually the regime collapsed from bankruptcy, it’s own bureaucratic weight, and the failure to deliver the promised society that the Revolution had foretold.

Our first article, by Professor Thomas Ward, reflects on the Bolshevik Revolution and social transformation in Russia. Ward was an intellectual sympathetic to communist ideals studying in France in the 1970s. After recounting events in the history of the Soviet Union, he discusses the anti-communism that developed in the West, with its roots grounded in the traditional religious values and free enterprise that the soviets opposed.
Ward next focuses on an approach to peacefully transform the Soviet system, largely ignored by Western media: that taken by Korean evangelist Sun Myung Moon. While preaching against the evils of the communist system, Moon organized activities bent on saving the regime from itself and providing a “way out” for those in control of the failing system. His approach was reconciliation and inclusivism. Ward recounts that because Moon’s approach was constructive transformation, when the Soviet system began to collapse, he was welcomed in Moscow, with the Moscow News calling Mr. Moon “the most brilliant anti-communist and the No. 1 enemy of the state”—and then added, please, that it was “time to reconcile” (p. 39). Ward concludes his article with reference to the work of John Paul Lederach on “confict transformation,” as opposed to conflict resolution.
Dr. Ward concluded his article with this description of conflict transformation:

“Conflict Transformation” recognizes that problems cannot be “resolved” without having addressed the deeper, invisible roots that lie at the heart of any given conflict. By viewing conflict through this lens, it helps us to address conflict in a way that allows for widening levels of partnership and cooperation between those who once perceived each other as enemies.

Our second article, by Kostas A. Fanti, Evaghoras L. Evaghorou, and Andreas P. Andreou, looks at this question of conflict transformation through the study of two societies—Northern Ireland and Cyprus—where conflict resolution took place through peace settlements brokered in 1998 and 2004 respectively. They argue that, while both countries reached political settlements, Cyprus appears to be moving more toward social transformation in which the two previously conflicting groups are developing a broader national culture in which members of both groups associate with one another more. Cultural groups in Northern Ireland, on the other hand, continue to promote identity politics of hatred, distrust, and separation. Northern Ireland appears to be less able to transcend its past, despite the political settlement that was reached.

Our third article, by Serena Clark, is a more detailed study of identity politics in Northern Ireland though interviews about public art, like murals painted on buildings. She has shown photos of various pieces of public art to determine reactions and sentiments of citizens to the images. Public art bares the soul of a community. This type of study can help asses the degree to which post-conflict social transformation has taken place. Her analysis, independent from the work of the authors of our second article, concludes that Northern Ireland remains a highly divided society.

Whereas conflict resolution relates to negotiation of the interests of two distinct parties, conflict transformation dissolves or transcends those distinct interests as the two parties merge into a larger unified whole. Transforming the deeper cultural roots of social conflict lies in the ability of people and groups to transcend their subconscious attachments to group identities that prevent people from seeing those outside their social group as deserving of equal rights and opportunities. The “in-group/out-group” policies of exclusion in cultural consciousness sow seeds of hatred, blame, resentment, and violence. This inability to transcend group consciousness is evident all over the world today, from partisan politics in the United States to bitter divisions in Europe between states and the European Union. It leads people to attack and plunder from enemies rather than working on solutions to social problems for all.

Conflict resolution through political settlements cannot “solve” cultural group identity conflicts that lead to violence, war, and conquest. Transcending ethnocentric attachments to group identity can be aided by inter-group cooperation, intermarriage, and spiritual teachings like Buddha’s philosophy of detachment from ego-centric or group-centric consciousness. In the United States civil rights movement, Martin Luther King, Jr. taught group reconciliation while activist groups like the Black Panthers and Ku Klux Klan perpetrated hatreds that led to violence, separation, and forms of tribalism. It is tragic when state policies like “arming moderate rebels” in the Middle East perpetuates and exacerbates this deeper cultural division, causing more violence and war. As articles in the March and June 2017 issues of International Journal on World Peace explained, these activities destroy rather than transform societies, making ideals of both democrats and socialists farther from reach than before such revolutions begin.