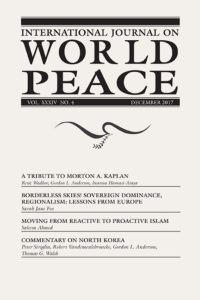 This year marks the 60th Anniversary of the Rome Treaties that created the European Economic Community (EEC). Since the origins of the nation-state system with the Peace of Westphalia in 1648, it has been a long arduous path towards a stable and peaceful international system. The process, which began in Europe as a treaty among warring kingdoms, led to an international state system represented by the United Nations. But the idea of the nation-state is foreign to traditional societies and empires, and perhaps not appropriate for modern pluralistic societies.

The Idea of a Nation-State
The original concept of the nation-state involves the idea of a king deciding the national religion or value system that applied to all residents on his territory. The idea of a religious system coterminous with a territory is not new. Egypt, Babylon, Israel, and Rome all had national gods that guided and protected their societies and who were worshiped in temples. Then in 380 ad, Emperor Theodosius I of Rome made Nicene Christianity the official state church of the Roman Empire. The relationship of church and state was often contentious, with popes and kings vying for supremacy. The Reformation, spearheaded by Martin Luther and John Calvin, led many kings and princes to adopt new denominations of Christianity they considered better. And, in 1534 ad, Henry VIII in England created a national church for England. When the Peace of Westphalia was signed, every state had an official religion. The King provided security and the religion provided the cultural value system.

Then, following the American and French Revolutions, to be an American or French national, regardless of race, religion, or origin, required allegiance to a secular state agreeing to speak the national language and live peacefully with others on the territory. This secular understanding of of “nation,” which theoretically allows for pluralism, has been difficult to implement because these states enacted social policies through secular political processes that conflict with the value systems of groups living on the territory that agreed to the rules of citizenship.

These secular social policies that include issues like healthcare requirements, bathroom policies, and dress requirements contain cultural elements normally associated with race, creed, or religion, and thus are elements of new state religions that often overlap with what has been called “political correctness.” Even though they are not a full-blown set of religious values, these state values both conflict with some of the values of the people living on the territory, and undermine the notion that the state is genuinely pluralistic.

The problem of the “secular state” increasingly adopting state social values is particularly frustrating for minorities whose values conflict with state laws. Public education that teaches contrary values or taxpayer-funded abortions are examples of how the secular state can become a quasi-religion when the roles of “nation” (social values) and the “state” (territorial administration) are not clearly defined. Modern democracies are increasingly creating laws relating to social values of majorities and alienating traditional religious and ethnic groups who could live together peacefully in a minimalist state.

The state, as a territorial entity, has other functions that naturally fit with territorial governance: highways, waterways, border security, and internal policing that govern territorial functions, not their values. Is a state, which maintains law and order through force, an entity that can show compassion in particular ways, or is that better achieved through the love and volunteerism that binds together a community?

The European Union
The concepts of functional and social integration are also important when moving up to the level of a federation of states—the United States, the former Soviet Union, or the European Union. Our first article, by Sarah Jane Fox, marks the 60th anniversary of the Rome Treaties, which created the European Economic Community (EEC). This is an evolution involving an integration of the nation-states of Europe—states that have frequently distrusted one another. States, like individuals, desire to maintain their rights and sovereignty, but have been willing to cooperate and relinquish a portion of their sovereignty when there is greater benefit by working together.

In her article on “Open Skies!” Fox examines the development of the European Community particularly from the standpoint of aviation, where today within the European Union the skies are borderless, whereas borders continue to exist and require individual aviation agreements between individual states. As she describes the process of integration, along with the frustrations that led to Brexit, which might be seen as dis-integration, it seems apparent that functional integration is far easier for states to accept, than a total integration that would dissolve their sovereignty and turn them into provinces.

The practical successes of the European Union she describes seem to support the functional integration described by Ernst B. Hass in Beyond the Nation-State: Functionalism in International Organization over the idea of World Peace Through World Law advocated by Grenville Clark and Louis B. Sohn. This is more consistent with Immanuel Kant’s idea of Perpetual Peace than a concept of a world government that regulates the internal affairs of states. At the federal level, this would become a form of state slavery rather than voluntary employment, because it demands individual states, and the people in them, to serve the will of a different master.

Islam in a Community of States?
The second article, “Moving from Reactive to Proactive Islam,” by Saleem Ahmed looks at raising the consciousness of Islam to accept other religions in a pluralistic world. Ahmed argues that much of contemporary Islam does not understand or account for Muhammad’s own spiritual development. The Quran is a compilation of Muhammad’s sayings by topic, not by chronological order. However, Muhammad had experiences later in his life that led him to accept “the people of the book,” even though he had approved the beheading of 700 Jews earlier in his life.

Muslims unaware of this development in Muhammad’s own spiritual consciousness do not know what to make of the fact that some of the verses of the Quran appear to contradict one another when taken out of context, so many Muslims pick and choose those verses that justify the position they hold. By understanding that the more integral thought of the older Muhammad promoted peace among religions, and that Muhammad even named his religion “Islam” (Peace) in that period (p. 49), followers would help Islam appear a more proactive, rather than reactionary, religion in the world today.

As the world constantly changes, people and societies need to evolve to adapt to new realities. This means the ability to take one’s inherited worldview and transform it into a more inclusive view. When confronted with new realities, a reactionary will retreat to the comfort of past dogmas and refuse to change; the revolutionary will disown his past and seek to shape the world anew in his own image. Both the reactionary and revolutionary approaches wreak havoc on the world, and cause violence and death, because they hold “either/or” positions—either you believe in the way of my doctrine or I am justified in killing you. Whether a reactionary jihadist or a revolutionary communist, such views lack the strong and embracing heart to accept another as having equal rights. Neither the reactionary nor the revolutionary want to live in a pluralistic world.

Intuiting this situation, Ahmed, who has been active in leading numerous interreligious dialogs, is promoting such a reform of Islam, not reform that abandons or waters down its spirituality, but one that adapts its essential spirituality for life in a pluralistic and scientific world. This integral Islam proactively champions interfaith harmony, elevates women’s status, and nurtures scientific inquiry. Ahmed is especially urging other Muslims to adopt a mature integral spirituality rather than immature reactionary or revolutionary approaches.

United States Policy Towards North Korea
Next in this issue is a discussion of United States’ foreign policy, with an emphasis on North Korea, as tensions between the two countries have been escalating like two bullies in school taunting one another. Peter Siviglia argues that this behavior is not helping the cause of peace but increasing the possibility of violence and war. Rather, as in the article on the European Union discussed by Sarah Fox, it is important to build trust rather than fear. This has always been a formula for reducing tensions between nation-states.

I follow his article with a discussion of the evolution of the rules of just war theory and the formation of organizations like the United Nations to reduce the possibility that one state attack another by unleashing the other nations of the world to defend the victim against the attacker. The history of United States policy, like that of other major powers, has been to ignore the laws of war and peace and wield power arbitrarily because they have been able to do so.

The laws of war and peace that lie at the foundation of the international state system maintain that one state does not have a legal right to attack another and, if attacked, a state has a legal right to use force to repel the attack, but only to respond proportionally. U.S. President George H.W. Bush followed these rules in the first Gulf War in 1990, however, the “preemptive” war on Sadaam Hussein initiated by George W. Bush violated the rules of just war theory, as did President Obama’s bombing of Libya, arming rebels in Syria, and the assassination of Osama bin Laden. All these actions make the United States appear as a rogue state to the world.
The laws of war and peace function for the maintenance of the international system much the way the commandments “Thou shall not kill,” and “Thou shall not steal” govern the behavior of individuals within a state. Adherence to these rules are foundational for states to trust one another. In particular, Kim Jong Un has expressed a lack of trust in the US because of the US bombing of Libya, which was viewed in much the way his own regime is. The US following the laws of war and peace will not guarantee Kim will treat his people more humanely or stop his race to acquire nuclear weapons, but it will help create an environment within which the humanizing of the regime can take place.

Thomas G. Walsh follows this discussion with commentary that “soft power” approaches can build trust between previously warring nations. Indeed, this is how Germany, France, and Italy were transformed from states at war in WWII to states at peace with a common currency and passport fifty years later. Sarah Fox’s first article on the evolution of the European Union can help the world to see how international stabilization of Europe with “hard power” created an environment for soft power processes to flourish. Perhaps the major powers surrounding the two Koreas can work to create a parallel development on that Asian peninsula.

Finally, I am sad to announce the passing of Morton A. Kaplan, a founding member and senior advisor to International Journal on World Peace, and longtime friend and colleague. A tribute follows.