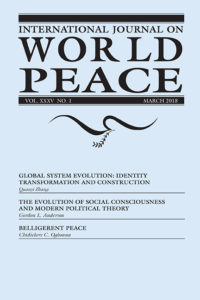 Grow…  seeds of evolution
Revolution never won
It’s just another form of gun
To do again what they have done
With all our brothers’ youngest sons
—Mike Pinder, “Lost in a Lost World” in The Seventh Sojourn, by the Moody Blues

The desire for social change has many times led to revolutionary fervor and the excitement for quick destruction of the old order, with the belief that society will magically change when dictators and corrupt social institutions are destroyed. But often the destruction of the social order that exists, corrupt as it may be, leads to anarchy, insecurity, poverty, refugees, and death. Last year International Journal on World Peace published several articles on the Arab Spring and the Bolshevik Revolution that showed how this recently happened in Syria and Libya, and how similar dynamics played out after the Russian revolution. Tunisia, on the other hand, the country that inspired the Arab Spring, did not go through revolution but experienced an evolutionary process where social institutions were constructively transformed.

Current identity is not only an inheritance of identity from the past, but a prerequisite and condition for the transformation of identity in the future. There are collisions, separations, conflicts, and natural overlaps, intersections, and integrations in creating and transforming identities of nations, religions, regions, and the world. Overall, human identity is historically progressing from independent groups to an emerging global system (p. 9).

Zhang argues that we are developing a “post-national-sovereignty identity” that is characterized by interdependence. “Identity is a key variable in the transformation of the culture of any system. If a certain cognition is universally accepted and popular, then at that system level, it becomes a part of the ‘collective identity’. When this process is better understood, we can identify ‘potentials’ for transforming a future identity along a path of purposeful evolution, making a solid foundation for the peaceful transition to the next culture or world system” (p. 22).

The next part of the article shows how the development of modern political theory reflects the development of state consciousness. Machiavelli promoted the idea of legitimacy. Hobbes developed the notion of consent. Rousseau developed the notion of general will. Locke added the notion of rights. The U.S. Founders added the idea of pluralism of group identity and checks and balances on power that would allow the freedom of individuals and groups to pursue happiness so long as that pursuit did not prevent the similar pursuit by others. There is also a discussion of Karl Marx, the recognition of the impact of industrialization on social justice and visions of socialism.

This discussion is intended to show that each stage of social development involves Ken Wilber’s evolutionary process of “transcend and include.” Just as children are taught not to run out in a street, put their hand on the stove, steal, or kill others, social rules that reflect a consciousness that protects people from harming themselves and others are required as boundary conditions for the development of societies that mature and become productive. Revolutions destroy these boundary conditions, causing society to collapse, while evolutionary social development refines boundary conditions to eliminate structural oppression and punish corruption.

The article emphasizes that a mature or “genuinely socialist” society that promotes justice, well-being, and the happiness of all requires a majority of inhabitants to possess what Wilber has called second-tier consciousness—a consciousness that has mastered cognitive skills, seeks the well-being of all, and has transcended the ego.

Our third article, by Chidiebere C. Ogbonna, relates to structural violence and development. Ogbonna develops the idea of “belligerent peace” to describe the peace of the status quo. In The City of God, St. Augustine wrote:

Even when men are plotting to disturb the peace, it is merely to fashion a new peace near the heart’s desire; it is not because they dislike peace as such. It is not that they like peace less, but that they like their own kind of peace more.

A belligerent peace is the type of peace imposed by a ruling class. As societies develop from the dictatorship of a conqueror to the pluralism of a democracy with NGOs and professional peace workers, the type of peace differs, but can still be a form of peace perceived by others as foreign and imposed. Ogbonna, a lecturer in development studies in Uganda, writes:

Instead of peace-building emanating from the people based on their needs and aspirations, it is imposed on them by peace workers who assume to understand what is best for them and, as a result, the locals are faced with the challenges of adopting and adapting to a “foreign peace” (p. 65).

Ogbonna has observed professional peace workers, paid to engage in “peace activities,” producing social change envisioned by those who are paying the peace worker, and not genuinely rooted in the needs and aspirations of the people being served. He raises the question about conflicts of interest between the peace workers’ salary provider and those being served. The same questions get asked about the conflict between the economic motives of hospitals, doctors, and pharmaceutical companies and the pursuit of the well-being of patients. He explains how, through grant-giving processes, well-meaning peace researchers become instruments of political regimes.

It refers to fair distribution of power and resources allocation and where people can literally attain their full potential without impediments resulting from direct and structural resistance…. The main difference is that the conflicts arising from positive peace are managed on the basis of cooperation and rational reasoning among the parties in a constructive way and considering the legitimate demands of each party mostly through structural reforms (p. 70).

Ogbonna argues for an evolutionary rather than revolutionary approach to social change. Rather than forbidding the work of NGOs, expelling democratic peace workers, and killing anyone who doesn’t leave, evolutionary transformation of political structures can fine-tune peace work so that it follows the principle of doing good without inhibiting development or creating “belligerent peace.”

A primary concern Ogbonna cites is the idea of economic sanctions imposed by one state on another. Economic sanctions are often used by foreign powers to force social change in badly behaving governments, but these sanctions often bring great harm to the populations living in those countries. During the apartheid period in South Africa, “peace workers” often supported policies of boycotting investment in South Africa. Such policies were used to target regimes without consideration of the impact on the citizens who depended on the same economy as the rulers. He refers to the use of terms like “offending nation” or “target state,” where the impact on citizens is considered “collateral damage.”

Ogbonna argues that economic sanctions often do not target the actual offenders. Innocents can be hurt, as when a bomb is dropped on a city. He contends that economic sanctions would be better if they targeted individual offenders, for example freezing the bank accounts or assets of members of a regime involved in the perpetration of policies like apartheid. While this was the stated goal of the Western countries in more recently targeted sanctions against Robert Mugabe in Zimbabwe, Ogbonna argues that “they had regrettably negative impact on the rights, welfare, and well-being of the entire population.” These sanctions were a form of structural violence and belligerent peace.

This introduction began by quoting a song by the Moody Blues: “grow… seeds of evolution, revolution never won, it’s just another form of gun.” Economic sanctions and belligerent peace, too, are another form of gun. They are a form of creating change through force. Sanctions are “reactionary” rather than “revolutionary.” But revolutionaries often attempt the use of force as well. They frequently refer to “the fight for peace,” which sounds like an oxymoron. Perhaps “education for peace” and “loving for peace” are required to bring about the evolutionary development of a peaceful world.