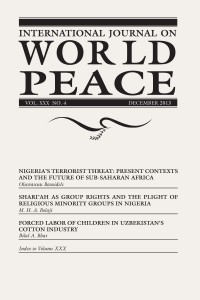 This issue of IJWP has two articles related to the Boko Haram group in Northern Nigeria and an article on child labor in Uzbekistan. Boko Haram is a northern Nigerian Islamist group that has killed thousands in campaigns of terror against Christians and others. It has sought the implementation of Shari’ah law in Nigeria and it is part of a growing alliance of international Islamist groups, spreading its influence beyond Nigeria and providing safe harbor for others, like Al Queda, in Nigeria.

Our first article, “Nigeria’s Terrorist Threat: Present Contexts and the Future of sub-Saharan Africa,” looks at the reasons for the rise and expansion of Boko Haram in poorly governed states in Northern Nigeria. It explains why military attempts to eliminate such groups often have the reverse effect of stimulating their growth, because they do nothing to eliminate the threat to traditional values and ways of life associated with secular states and the United Nations. These groups, uniting against this generalized common enemy, are in fact disparate groups and often bitterly divided among themselves and do not share common local objectives.

Ironically, the West has made itself a foil for all that appears evil to these groups by imposing simplistic understandings on African political and social realities, viewing them through the lens of Western interests that include economic development, climate change, and democratic change. These groups do not so much arise in the power vacuum of a failed state as in mismanaged and corrupt states. Western policymakers fail to grasp these issues and implement strategies that address the core reasons for the existence of these terrorist groups.

Our second article, “Shari’ah as Group Rights and the Plight of Religious Minority Groups in Nigeria,” examines the results of the implementation of Shari’ah law in several Northern Nigerian states and its impact on minority groups. In such cases the tyranny of the majority is imposed on minorities causing social dysfunction and structural violence, which are not the goals of those who mistakenly believe Shari’ah law should be imposed at the state level. The author argues that many of the genuine goals of Islam are better achieved through cultural rather than political institutions. A state has an obligation to provide security to all its citizens and the groups into which they organize, and this mandate is in conflict with the imposition of group-specific goals on all citizens and other groups. Boko Haram’s controversial attempt to establish state theocracies, whose operations are antithetical to the non-establishment and free exercise clauses in the Nigerian constitution, is a denial to northern Nigerian Christians and other religions of a secure environment in which to practice their beliefs.

This brings us to the larger problem of distinguishing between levels and spheres of governance in complex modern societies when most inherited languages and cultural institutions have evolved from homogeneous and face-to-face tribal societies. The attempt to impose the principles of such societies on a rational state reveals a failure in understanding major differences between interpersonal and rational societies by contemporary bureaucrats and policymakers.

Our third article, “Forced Labor of Children in Uzbekistan’s Cotton Industry” highlights the rise of child labor, if not slavery, in post-communist states, especially Uzbekistan. Here is an example of a modern state misusing its power to engage in business rather than the protections of citizens. The use of state power to assist the financial ends of political rulers and elites has become most explicit in Uzbekistan in the wake of the collapse of the Soviet Empire, which provided cotton picking equipment in the past. Cotton, Uzbekistan’s largest export, remains essentially a state monopoly absent the equipment. In this new environment, political rulers have replaced machines with child labor, mandating that school children plant and pick the cotton.

This policy is not only a form of child labor outlawed by the UN International Declaration of Human Rights, but it causes children in rural areas to receive two to three months less public education in a year than urban children, leading to a knowledge gap and the resentment by the rural children against children raised in cities. While such policies exist, to a lesser extent, in Tajikistan and some of the other former Soviet states, the situation is the most severe in Uzbekistan, where the author did his extensive research interviewing children, parents, farmers, school officials, and policymakers.

The social problems generated by Boko Haram represent an inappropriate use of political power to achieve group cultural and religious goals. Uzbekistan’s cotton policies represent the inappropriate use of state power by an elite to engage in economic profit making. These two issues lie at the core of the general failure to grasp the proper role of the state and its relationship to the political and economic spheres in a modern complex society. A state should be a referee that allows religious groups to pursue their ends, so long as they do not interfere with the ability of other groups to do so. Likewise, when the state becomes an economic player, rather than the referee of the economic sphere, it can become a slavemaster, like a pre-Civil War Southern U.S. plantation owner, with all on its territory forced to serve the owner’s ends rather than having the freedom to pursue their own dreams.

The hijacking of government for religious and economic ends exists in Western Europe and America in more subtle ways than Northern Nigeria and Uzbekistan, but reflects a similar failure to distinguish appropriate levels and spheres of governance. Whether it be established churches in Europe or subsidies to corporations in the U.S., these dysfunctional policies lead to the dwindling attendance in European churches and the formation of economic bubbles in the United States. The use of the force of government, rather than the voluntary nature of culture and the market, is one of the most tyrannical aspects of modern society. There remain inadequate checks on the use of government to consolidate power and wealth at the expense of citizens, and within democracies to check the use government to shift resources from one faction to another. This problem needs to be resolved if we are to escape the within-state conflicts that became manifest in the post-Cold War era.