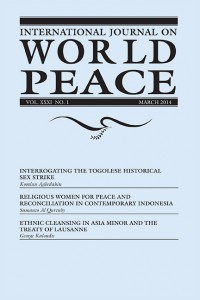 The first two articles of this issue of IJWP are related to women and non-violent strategies for peace.

The first article, by Komlan Agbedahin, is about an attempt by women in Togo to use a sex strike to end the country’s political impasse. The concept dates back to the ancient Greek comedy Lysistrata by Aristophanes, first presented publicly in 411 b.c. More recently, a sex strike had been used with some success in Liberia that inspired Togolese women to attempt this method of non-violent action. The Togolese experiment, however, ended in failure. This article discusses reasons for the failure, including inadequate preparation and miscommunication and the neglect of the political, economic, and social context of Togo.

The second article, by Sumanto Al Qurtuby, discusses how women bridged the Muslim/Christian religious divide that had brought interreligious conflict to eastern Indonesia during a transition to greater democracy after the downfall of Suharto in 1988. The author argues that it is wrong to assume that all women promote peace. In Indonesia, many women fought to support the triumph of their own religion through violence. However, some of these women combatants abandoned violence and joined the interfaith peacebuilding efforts of others after they began to take traction.

Our third article, by George Kaloudis, discusses events in Greece and Turkey that led to a Christian Holy War against infidels in 1921, and how the Treaty of Lausanne, brokered by European states, reinforced the ethnic genocide that followed in its wake. The Treaty of Lausanne was rooted in the prevailing ideal of the “nation-state,” in which each state would consist of a homogeneous ethnic nationality. This concept is, at its core, a concept of structural violence, because there is no such thing as a modern state in which all residents hold identical ethnic and cultural views. Yet, this concept still inspires elites to seek for the elusive ideal in which all citizens will identify with and agree with the policies of the state because they reinforce a particular national ethnic or religious culture.

The Treaty of Lausanne stated the following:

As from 1st May 1923, there shall take place a compulsory exchange of Turkish nationals of the Greek Orthodox religion established in Turkish territory, and of Greek nationals of the Muslim religion established in Greek territory. These persons shall not return to live in Turkey or Greece without the authorization of the Turkish government or of the Greek government respectively.

The result was heart-rending: “Anybody who lived in the ‘wrong’ place, from the viewpoint of religion, would be deported across the Aegean to start a new life in the ‘right’ country.” Borders were drawn and millions of people forced to relocate or suffer the possibility of being ethnically “cleansed.” Some people did not meet all the legal criteria for the compulsory population exchange and ended up as “unclean” in the newly cleansed territories. The Treaty of Lausanne was an example where the prevailing modern theories of the nation-state were in direct conflict with modern theories of international human rights.

The concept of a pure nation-state did not even come to an end with Hitler or Milosevic. Current elites in Western Europe and the United States attempt to impose their values, religious or secular, on culturally diverse populations through laws on healthcare, aging, abortion, education, and marriage, despite the fact that these issues are shaped by cultural and national values. However, structural violence occurs when state laws and education promote specific views on cultural issues that divide large segments of the population.

Finally, I would like to mention the review of Joseph Tainter’s Collapse of Complex Societies by Tom Kando. Kando’s review is based on a recent YouTube video of a lecture by Tainter, and its challenging thesis is inadequately discussed in peace research or political science today.

One type of social collapse comes from overuse of natural resources. This Malthusian collapse can be compared to maggots on a carcass—when the host is devoured, the maggots disappear. The depopulation of Easter Island is often cited as an example. However, collapse can also follow the evolved complexity of a society, in which people are unable to adjust sustainably to the increased complexity.

Sustainability existed in the agrarian subsistence economy that underlay the Chinese Empire for over 1,000 years between the 5th and 15th centuries. The society was able to encode rules that were learned by leaders prepared through civil service exams. However, in the rapid pace of change to more complex forms of life, like industrialization and bureaucratization, fundamental social features that allowed a more complex society to arise—traditional family, education, self-sufficiency, and distribution of wealth and resources—are often displaced by complex social institutions that undercut the social pillars upon which they rest.

Tainter and Kando discuss parallels between the collapse of the Roman Empire and possibility of social collapse in our contemporary world. One issue is globalization and complex layers of production and distribution that cause massive shifts in employment and increased wealth disparity as middle class workers are replaced by robots and lower-paid workers.

An industrial feudalism, based on corporate mergers and globalization, can be increasingly compared to agrarian feudalism in which ownership of land was centralized under feudal lords and the descendants of the Roman middle classes became serfs. At the height of the Roman Empire there was a much larger middle class and ownership of land was more widely distributed, allowing financial independence to more citizens. Centralized political power colludes with centralized banking and industry, enabling the downward movement from the middle classes to industrial serfdom.

Agrarian feudalism never decentralized or was self-reformed. Rather, a new economy developed around city states in the Middle Ages. Will our “information economy” provide new opportunities for those marginalized by industrial feudalism? Kando’s article provides grist for thoughts about these issues.