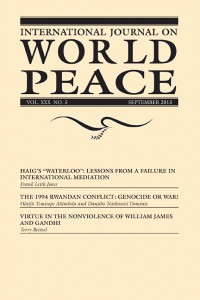 This issue of IJWP has three articles that look at conflict: types of conflict, conflict mediation, and the relation of virtue to conflict.

The first article, “Haig’s ‘Waterloo’: Lessons from a Failure in International Mediation” is a study of why and how Alexander Haig failed to negotiate a resolution to the conflict between the United Kingdom and Argentina in the dispute over the Falkland Islands. “Haig’s ‘Waterloo,’” provides a strong challenge to the assumption that the United States or any other powerful nation can broker peace between other nations because of its power. Some readers may remember Henry Kissinger’s famed “shuttle diplomacy” in the Middle East. Since then, many Americans have assumed their Secretary of State was in a unique position to meditate conflicts between other nations.

Professor Frank Leith Jones, author of this article, scoured recently declassified government documents related to Alexander Haig’s shuttle diplomacy during the Falklands/Malvinas islands dispute under the Reagan administration. While Haig’s team worked very hard, flying back and forth between Argentina, the UK, and the U.S., his efforts had a negligible effect on the outcome, which was settled by Britain’s reclamation of the islands through military force. In addition to providing a wealth of new information to the public, this study looks at the issues related to the neutrality of the negotiator, the motives of the parties in dispute, and the real impact such third-party negotiators can have in resolving such conflicts.

The second article, “The 1994 Rwandan Conflict: Genocide or War?” discusses the distinction between war and genocide and why the 1994 Rwanda massacre was a genocide, in an effort to dispel revisionist attempts—as in the Holocaust—to say the genocide never happened. After World War I, the Belgians acquired control of Rwanda, which had been part of German East Africa. They instituted a rather oppressive regime through the use of Tutsis as a ruling class, who served as a buffer against the oppressed majority Hutus. When Rwanda gained independence in 1962, the Hutus gained power and over one million Tutsis fled to neighboring Uganda and Burundi, where they eventually organized the Rwandan Patriotic Front (RPF). In 1990 the RPF invaded Rwanda. Top Rwandan government officials, mainly Hutu, began training young men into informal armed bands called Interahamwe. Government officials also launched a radio station that began anti-Tutsi propaganda. With UN mediation, and a promised peacekeeping force, the Arusha Accords were signed in 1993. However, the UN force was nominal and relatively powerless, and in 1994, after President Habyarimana was assassinated, the killing of over one million Tutsis and Hutu moderates began. Was this genocide or war?

This article by Olaifa Temitope Abimbola and Danjibo Nathaniel Dominic is an attempt to discuss the distinctions between genocide and war with the conclusion that the Rwandan killings were a result of genocide, rather than war. Citing Rummel, the authors explain that “power is a necessary cause for war or genocide; when the elite has absolute power, war or genocide follows as a common process.” The authors of this article also warn of some revisionist attempts to claim the genocide never happened, particularly among Hutus in exile. We are familiar with denials of the Armenian genocide and recent attempts to say the Holocaust in Germany never happened—despite all the evidence.

The third article, “Virtue in the Nonviolence of William James and Gandhi,” makes the point that the practice of non-violent resistance requires the virtue of courage, just as does the practice of war. Asking whether “pacifism is too passive,” author Terry Beitzel discusses the moral aspects of the nonviolence of William James and Mohandas Gandhi. This discussion is valuable in light of the Arab Spring and the non-violent protests that initiated it.

The Arab Spring was emboldened by a growing popular consciousness, embedded in international institutions that stress human rights over state sovereignty. While elites with power are emboldened to use power, as the previous article on Rwanda explains, masses are more able to accept non-violent approaches to social change. It is much easier to believe that the post-conflict society brought about though non-violent means will be inherently less violent than a regime based on violent conquest. In this article, Beitzel argues that “nonviolent action promotes greater virtue than war because nonviolent action actually requires more courage than violence and does not destroy others,” and “nonviolence is the preferred form of social action because if the nonviolent actor is wrong, she does not harm others.”

Of growing concern, however, is the question of whether those seeking non-violent change are aiming at new political and economic structures that will actually lead to greater happiness and freedom. In the case of Egypt, a growing number of non-violent activists have begun to feel they were pawns, used by the Muslim Brotherhood, to bring about a change of power, but not a change in life for the average citizen.

In our first book review, The Non-Linearity of Peace Processes: Theory and Practice of Systematic Conflict Transformation, edited by Daniel Korppen, Nobert Poper, and Hans J. Giessmann, a strong case is built against the simple goals of liberal and nonviolent social activists in modern complex societies. Korpen questions the assumption that what constitutes peace is universally congenial with “liberal democracy, neoliberal economic reform, human rights, humanitarian law and human security.” Non-violent protests for “greater democracy,” “economic justice,” or other desired goals will not likely bring about the desired end by merely tearing down the existing regime. The reviewer states, “In the study of protracted conflicts across the globe, the potentiality of systemic approaches to the theory and practice of conflict analysis and interventions seems to offer greater efficiency.”

Modern societies are complex, and powerful and wealthy people can manipulate elections or consolidate power in the name of economic justice. It is time for the peace community to realize that building a complex society requires a systemic approach rather than the linear thinking that lays behind many of the popular slogans. Systems approaches require interdisciplinary cooperation and prefer the gradual transformation of dysfunctional or oppressive aspects of particular systems, leading to a more sophisticated understanding of social institutions, their function, and their interrelationship. This is not fostered by merely changing a regime or expecting that a popular election will bring about peace.