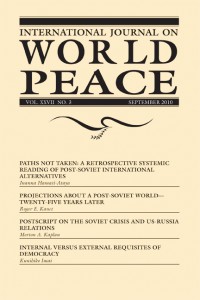 Twenty-five years ago, from August 16-20, 1985, the Professors World Peace Academy sponsored a conference on “The Fall of the Soviet Empire: Prospects for Transition to a Post-Soviet World,” organized by Professor Morton A. Kaplan of the University of Chicago and Lithuanian-born Soviet scholar Alexander Shtromas, who was teaching at the University of Salford in the UK. As an insider, Shtromas was one of the world’s most knowledgeable experts on the Soviet system. I was the secretary for the conference held in Geneva, Switzerland, in which over 90 research papers on all aspects of Soviet society were discussed.

In this issue of International Journal on World Peace, our first articles will take a retrospective look at the thought about the future of the Soviet Union and the international order at the time, some of the recommendations of Morton A. Kaplan and others, the collapse that came more quickly than most of those at the conference predicted, and opportunities for a more peaceful international order lost.

In his System and Process in International Politics (1957), Professor Kaplan introduced the idea of “boundary conditions” related to the maintenance of a social system. An example of a boundary condition for the maintenance of a state is financial solvency, another would be security against penetration of borders by an enemy, and another would be the failure to produce people capable of running a state. In the US, motivational speakers sometimes say that the Chinese characters for “crisis,” wei ji, mean “dangerous opportunity.” While contemporary Chinese do not interpret the words this way, there is a basis for that interpretation in the component parts wei and ji.

Such was the time after the US revolutionary war where a new system of government, based on principles and lessons learned through history, was created after a similar period of change. This development was by no means a foregone conclusion. The emergence of instability followed by a more oppressive regime than the British had imposed on the colonies was a distinct possibility. The times when human beings have forged better governments when there was opportunity have been few indeed. The creation of the Hammurabi Code, Rome’s Twelve Tables of Law, and the formation of the US Constitution stand out as contrary moments where human experience, reason, and the desire to create a better system triumphed over instability and the will to power.

As our first article, “Paths Not Taken,” by Inanna Hamati-Ataya from Lebanon points out, the dominant philosophy of realism and neo-realism in international politics at the time made pursuit of national self-interest—rather than the pursuit of a community of nations—the norm. And, while Kaplan’s ground-breaking System and Process had been widely translated and was hailed by political scientists in smaller, less-powerful countries, the dominant US political scientists ignored its wisdom in favor of theories that promised them popularity in the US policy-making circles that favored the idea of the United States as a sole super-power and unilateral world leader, rather than a committed servant of the creation of a genuine and stable international system.

Kaplan understands that the international system is supported by its component parts, and that each component state, while a subsystem of the international system, is also a social system. Kaplan had hoped that the collapse of the bipolar system, following the collapse of the Soviet system, would be replaced by a more stable system; yet what we witnessed was the attempt by the US to create a unipolar world.
The US founders viewed what the government were creating as a system, but ever since its creation the citizens and courts have primarily looked at its component parts in isolation from one another. As I explained in my book, Life, Liberty, and the Pursuit of Happiness, Version 4.0, the United States has drifted a long way from its founding principles in 200 years. The founding ideals and principles have been reduced to rhetoric as most people seek to get what they can for themselves through manipulation of the American system of government, rather than promoting any sustained effort to keep making it a “more perfect” government.

The United States began as a pact among thirteen states that shared a role in maintaining its stability. However, the states eventually lost their influence and the system eventually became bi-polar based on the contest between two political parties. Underneath the rhetoric both political parties attempt to manipulate the system to generate favors for their special-interest contributors and have little interest in the long-term stability of the social system. In fact, many of the laws they have promoted push the United States closer toward boundary conditions. In his presidential farewell address, George Washington warned about the development of such political parties, in a way similar to Dwight D. Eisenhower’s warning against the growing military-industrial complex in his farewell address.

The second article is by Roger E. Kanet, Professor of International Studies at the University of Miami. Kanet is an East-European expert who participated in Kaplan’s foreign policy panel at the 1985 conference. He analyzes the hopes, expectations, and thinking at the conference in contrast to later developments. One point he conveys is that the change was much more orchestrated by the nomenklatura, those at the top of the political hierarchy, than any new group emerging out of a crisis. He also notes that, in the absence of the community of nations Kaplan and Shtromas sought, during the past decade Moscow has redefined Russia’s role in world affairs as “a revisionist power committed to rolling back some of its geopolitical losses that occurred after the collapse of the former Soviet Union and to returning Russia to the status of a major world power.”

The third article contains comments by Professor Kaplan that serve as a footnote to his experience with Soviet and US foreign policymakers from the 1970s to the 1990s.
Our fourth article is on “Internal versus External Requisites of Democracy” by Kunihiko Imai. This is a statistical study of the impact of various factors on the level of democracy in a state. It includes the relative importance of external variables such as the internationalization of national economies and influence from the United States, and internal variables such as culture/civilization, religion, level of economic development, literacy rate, and ethnic fractionalization. The article concludes that simplistic single variable theses, such as Huntington’s clash of civilizations, are inadequate in explaining the development of democracy.

Imai’s conclusions lend support to the idea that a society is a complex system, and should be analyzed as such. Each of the variables he examined, and others, is a contributing factor to a social system. When one understands that once the boundary condition of a variable—for example literacy rate adequate for responsible voting—is established to enable democracy to exist, then the impact of that particular variable becomes less significant than other variables. Similarly, when literacy rates in a democratic state decline towards the minimum boundary, then there should be concern that a democratic state will fail.

Finally, in the book review section, I have reviewed J. Martin Rochester’s new and excellent introduction to international relations. While it is an excellent textbook by contemporary standards, the absence of systems theory is striking, especially when world peace requires a viable international system.