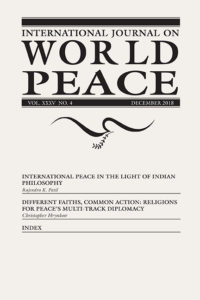 Social science research methods are able to produce verifiable knowledge about society that is more reliable than the seemingly arbitrary suppositions of religious traditions based on prophetic revelation or sacred texts, or on ideological belief systems based on other suppositions.

Auguste Comte, “father of sociology,” proposed a threefold view of the evolution of social consciousness: (1) the theological stage, in which gods and spirits control our fate, (2) a metaphysical stage, in which existence is governed by laws and processes that can be described by rational abstract thought, and (3) a “positive” stage that is based the scientific method. “Positive” implies more certain and verifiable truth: truth as something that is known rather than belief based on suppositions or claims.

However, such technically obtained knowledge only explains what is observed, not what ought to be. When social scientists make value judgments about what ought to be, those values arise in one of three ways, based on the stage of consciousness: (1) religious beliefs the scientist developed during social upbringing, (2) philosophical or ideological beliefs extended from rationalizing ideas like social justice, and (3) normative beliefs that argue that observed norms are what ought to be.

The logical conclusion is that even though social science research methods provide more reliable information than religions and ideologies, they are unable to solve human problems with only empirical knowledge. Empirical research methods do not provide any vision of what ought to be, but only what is observed and verified. Thus Comte’s third “positive stage” becomes socially useless unless it is put in the service of some human values.

The first attempted solution to the problem of values was “interdisciplinary studies,” where the social science would find meaning in theories and data of other disciplines, like biology, psychology, history, economics, or politics. New disciplines evolved such as socio-biology and social psychology that transcended a single discipline, but they were still not systemic. Often these new disciplines reflected the metaphysical suppositions of the other discipline to which sociology attached itself. Either the social sciences, including peace research, must remain guided by values generated by the stage one or stage two consciousness described by Comte, or a higher stage of consciousness than Comte described is required.

Despite the modern prejudices against religion and metaphysical thought, many scholars in these fields have been sufficiently convinced by modern science and have accepted the value of modern social science research methods. They apply such methods to their own visions of what ought to be, often advancing a more global, integral, or divine consciousness that can serve as a better foundation for peace than the more arbitrary research that grows out of interdisciplinary studies.

Our first article in this issue, written by Rajendra K. Patil, also known as Swami Durgananda, articulates an Indian vision of peace. A careful reader will recognize that, despite the foreign thought system and concepts that color the Indian worldview, the problems and issues he seeks to address are the same problems that concern many Western peace research scholars.

Just as individuals do, societies also evolve progressively from animal-like to human/intellectual, and further to an enlightened state.

The first question a Westerner might ask is whether an “enlightened state” is higher than the empirical knowledge of science or something more along the lines of the theological consciousness of the Old Testament. However, clear from Durgananda’s next chart is that the rational/intellectual/mental level of consciousness, which corresponds to Comte’s third (and final) stage, is followed by two higher levels of consciousness: the Individual Self and the Supreme Self. The individual self includes the unity of all external and internal aspects of an individual, and the fifth stage includes unity of the individual self with cosmic, or divine, consciousness.

The evolution from violence to nonviolence reflects moving from a lower level of consciousness to a higher one. Empirical knowledge gained from Comte’s stage three consciousness, being value-free, is technically devoid of nonviolent values or a goal to achieve peace. This requires a social consciousness that includes values, and thus is at stage four or beyond.

International peace, from this standpoint, requires nations to develop and operate at a higher level of social consciousness. Durgananda provides seven “practical action points” for countries to be promoters of international peace. While not all individuals or groups in India reveal this level of social consciousness, it has been instilled in the cultural teachings of India since the beginning of its civilization.

This cultural teaching of India, often hastily discarded by modernists as “religion,” reflects a higher level of consciousness than peace research based on the highest stage of social consciousness that Comte discussed. Indeed, peace research can benefit from integration of the external knowledge that is rapidly developing with the internal knowledge that has been developed, not only in India, but other religious traditions that have promoted high levels of spiritual consciousness, as opposed to the theological and metaphysical doctrines so often used to pigeonhole religion.

Our next article, “Different Faiths, Common Action: Religions for Peace’s Multi-Track Diplomacy” by Christopher Hrynkow, looks at the activity of a religion-based nongovernmental organization (NGO) working alongside countries at the United Nations. This is “positive peace” work based on the social values common to the many religious organizations that participate in Religions for Peace. One of the fundamental tenets of the religious NGO is transcendence of the divisive theological and metaphysical doctrines that often prevent religious groups from working together. In this way they consciously adopt a stance at a level above the stage one and stage two consciousness that modernists often use to denigrate religion.

Hrynkow analyzes the emic (self-described) understanding of Religions for Peace through the lens of peace research and multitrack diplomacy. Particularly he focuses on the 9-track diplomacy discussed in Diamond and MacDonald’s Multi-Track Diplomacy: A Systems Approach to Peace, which is a rather normative approach in the field of peace and conflict studies. The nine tracks include: (1) government, (2) professional conflict resolution, (3) commerce, (4) private citizen interaction, (5) education, (6) activism, (7) religion, (8) philanthropy, and (9) information. Hrynkow argues that in their emic understanding, through material in their literature and on their website, Religions for Peace is involved in all nine tracks and agrees that these tracks need to merge in a comprehensive systematic approach to peacebuilding.

Diamond and MacDonald argue that these nine areas exhaust the breadth of social life and imply that an approach that covers all nine tracks will be most successful. While these nine areas may cover the external scope of social institutions, the level of social consciousness brought to each area is fundamental to the success or failure of each track. For example, a government reflecting an instinctual level of consciousness in the attempt to resolve conflict through conquest is operating at a far lower level of social consciousness than a government that recognizes other states as equally deserving of their existence in a community of nations.

Religions for Peace, by adopting spiritual values common to all religions, purports a global consciousness operating with concern for all people in the world. This is a view far advanced over states that use scientific knowledge in multi-track diplomacy to maximize strategic national self-interest. The goal of national self-interest tends to be a one-sided victory and not a win-win outcome. Hrynkow’s article thus implies that Religions for Peace is, at least rhetorically, engaged in international peacemaking with a higher consciousness than most nation-states. Indeed, the success it has had in conflict resolution and peacebuilding in many areas where states could not resolve issues further supports this conclusion.

Nevertheless, Religions for Peace rhetoric and reality do not always intersect. Hrynkow shows that, like other social institutions, Religions for Peace does not always live up to its professed ideals. Elites are tempted to use their position for their own egoic purposes, and do not always listen to voices less important for their own positions, even if they are addressing institutional goals. This problem became a national disgrace for the FBI leadership in 2001, when they failed to heed the warnings of field agent Coleen Rowley who wanted authority for a broader investigation of Zacarias Moussaoui, a man who was later indicted as a conspirator in the 9/11 attacks. I encountered a similar lack of response from the Clinton Foundation when I had located a much-needed fire truck for Haiti, even though the foundation has a stated interest in serving the people of Haiti. Fortunately, Haitian-Americans raised funds to ship the truck. Thus it was disappointing, but not surprising, to read that Hrynkow had not received a response from Religions for Peace a year after he had requested information that might help improve this article about the organization.

History is littered with examples of institutional consciousness that degenerates from the original social idealism of a visionary founder into a vehicle to be used by the next generation of leaders who view positions as jobs or rewards received for loyalty. Whether it is a government, an agency, a corporation, a church, or a tax-exempt NGO, the high social consciousness behind the founding of a social institution often degenerates into a lower social consciousness that allows the institution to be used for more selfish individual or group purposes. This is particularly apparent when individuals or groups run political ads promising to fight (others) to get something for a particular group of voters, rather than offering constructive solutions to improve the society as a whole.

However, it is not enough to structurally merge all the external knowledge of a system; without guidance from some type of vision that generates a transcendent internal social consciousness, modern scientific research is unlikely to bring peace.