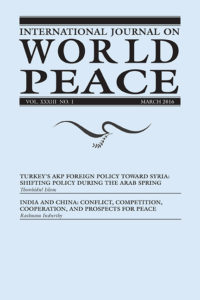 The modern world is still coming to grips with the concept of a nation-state and the degree to which states can be at peace when laws promote the cultural values of one group over another. For example, is it possible to have a religious state (e.g., a Jewish, Christian, Islamic, or a Buddhist state) that does not inhibit freedom and development by imposing a past worldview and practices on its population? Is it possible to have a state-imposed religious system that does not persecute minorities?

In the West, Emperor Constantine and others declared Christianity the religion of the empire in an attempt to create social stability. Christians without political power had proved honest and caring, as opposed to the corruption that existed everywhere in the Roman Empire. However, it has been said that when Rome became Christian, Christians went the way of Rome. Power corrupts, and it corrupted Christianity in the West. Popes and kings used religion to oppress people, most of whom were serfs, by promising salvation in the next world for obedience to their religious and feudal lords in this one. By the end of the first millennium, popes and bishops had declared crusades, fought over wealth, used deceit and trickery, and had sired countless children despite their vows of chastity. They used the power of the state to conduct horrific pogroms against heretics and Jews. Ingenious tools of torture, like racks that stretched people until they “converted” or their limbs detached, were invented for inhumane treatment contrary to Jesus’ message of “love your enemy.”

In an attempt to eliminate the Cathars in Beziers, the Papal legate, the Abbot of Citeaux, Arnaud Amalric, afraid that some heretics might escape if good Catholics were allowed to leave, reportedly said to his mercenary soldiers “kill them all, God will know which are his.” He justified this massacre citing 2 Timothy 2:19, “Nevertheless the foundation of God standeth sure, having this seal, The Lord knoweth them that are his. And, let every one that nameth the name of Christ depart from iniquity.”

The Protestant Reformation arose out of indignation over the excessive behaviors, abuses of power, and exploitation carried out by the officials of the Church of Rome. Luther, Calvin, Zwingli, and a host of other reformers attempted to correct the Church, which eventually went through its own counter-reformation to stave off its further collapse. These events brought about religious pluralism in Europe, but it did not result in the separation of church and state. Each principality declared which religious denomination it would adopt, for it was still believed that a political system without an official religious/moral system would collapse. However, rather than bringing peace, the Reformation was followed by the Eighty Years Wars, the Thirty Years War, other wars over religion, and popular rebellions. It was one of the longest and most destructive periods of conflict in European history. This was finally settled by the Peace of Westphalia, which gave rise to the modern European nation-state. But, initially, the European nation-states all created state churches and enforced their official religious values on all citizens.

The first hint of official pluralism came in the Netherlands at the end of the Eighty Years War when Spain was defeated and the Dutch established a Protestant republic. However, there were many religions represented in Holland, including a number of Jews, and it was not possible to get a majority to support a constitution that did not officially promote religious tolerance. While there was a state church in Holland, Holland was the first modern European state where religious pluralism was protected, and the Netherlands provided a refuge for many religious refugees in the 17th century. The United States Constitution, adopted in 1789, took religious freedom a step further and forbade the establishment of religion. As in the Netherlands, this was a practical necessity because each of the original 13 states had its own state church, and no state would join a union that officially maintained a different religion. The US founders recognized that the system they created would only work so long as the pluralistic civil society created a virtuous people. The experiment was so successful that soon all individual states adopted religious freedom. Connecticut was the last state to drop its official religion in 1828.

The absence of an official state religion led to the development of the concept of human rights. Dutch and American writers took the lead on this to curtail abuses of power in their own countries, with the United States “Bill of Rights” being the first document that defined the rights of people against governments. Eventually, the United Nations Universal Declaration of Human Rights was developed under the leadership of an American, Eleanor Roosevelt, to prevent abuses against people everywhere such as had been perpetrated in the “Dark Ages” of Western civilization. Religious freedom was protected in Articles 2 and 18 of the Declaration. The United Nations Declaration states that human rights are due to every person because they are a person, and not because they are a person belonging to a particular religion or cultural group. Thus, human rights are an outgrowth of religious pluralism, and they serve as general principles that limit discriminatory behavior of all social institutions in the modern state.

Today the Islamic world, which was begun in a nomadic society, is grappling with the concept of the modern state, and the corruption, terrorism, religious persecutions, war and violence in the Middle East and Northern Africa reveal conflicts of pluralism versus monolithic nation-states. Some analysts have compared the inhumane religious behavior of ISIS to the Inquisition of Catholic Spain in the 15th century. Others argue that Islam is in the process of going through its period of reformation to enter the modern world, with many of the same types of wars that dragged on for over a hundred years after the Protestant Reformation in the West.

Our first article in this issue of IJWP, on “Turkey’s AKP Foreign Policy Toward Syria,” provides an overview of the policies of the Justice and Development Party (Adalet ve Kalkinma Partisi)(AKP) in Turkey. It was formed by Recep Tayyip Erdogan in 2001, with the idea that there can be a modern Islamist democracy that respects human rights. This party swept the general elections in 2002 and has been the ruling party in Turkey consolidating its influence ever since.

The AKP was in the center of promotion of the Arab Spring and has affinities for the Muslim Brotherhood that was banned in Egypt and Syria. Turkey attempted to help political parties in the region with this type of ideology to become the ruling party during the Arab Spring. In Egypt, the Muslim Brotherhood swept the elections but proved incapable of state governance. Istanbul houses the party of the Syrian Brotherhood in exile that is banned by the Assad regime. While the article itself is focused on Turkish-Syrian relations and how they changed as a result of the Arab Spring, the underlying issue hinges on whether Islam (or any state religion), democracy, and human rights can coexist in a state. The AKP has only been in power for a little over a decade, which is a very short time in historical retrospect.

Turkey initially worked for democratic reforms of the governments in Libya, Egypt, Yemen, and Syria, but in every case came to decide regime change was necessary. Many Westerners allied with Turkey, like the Obama administration, felt the same way. Unfortunately, the only regime that changed for the better during the Arab Spring was Tunisia, which did not involve the meddling of outsiders but was reformed from within under the leadership of the National Dialogue Quartet democracy group that won the Nobel Prize. Libya and Yemen experienced regime change but have become anarchic failed states that harbor ISIS and Al Qaeda terrorist cells. Egypt experienced regime change that was followed by a military coup and further repression of the Muslim Brotherhood. In Syria, Assad hunkered down with the backing of the Russians and Iranians and has proceeded to slaughter thousands of citizens and cause millions to flee the anarchy there. The track record for the idealism behind the Arab Spring, and the concept of regime change, has not been good.

Our second article is a substantial overview of “India and China: Conflict, Competition, Cooperation, and Prospects for Peace.” India and China are divided by Tibet and the borders in the region and the autonomy of Tibetans have been contested, not unlike the way the Syria-Turkish border runs through Kurdish territory. In both cases, these stateless minority groups pose a threat to the stability of relations between the bordering states. Syrians have supported the Kurdish Worker’s Party (PKK) while the Turks have considered it a terrorist group. India supports the independence of Tibetans whereas China considers that a threat. While India-China relations have generally improved in trade and diplomacy, the underlying disputes over borders in the Himalayan territories continue to make genuine peace elusive.